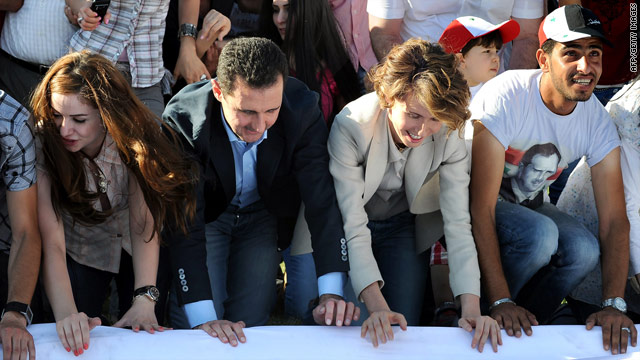 Anti-government demonstrators in Syria took to the streets on Friday, a common sight after weekly Muslim prayers since the protests began more than three months ago. But this day of countrywide demonstrations had a different twist.

The Syrian regime, which earlier this week permitted a gathering of opposition activists as criticism mounted against the government, escorted international reporters, including CNN's Arwa Damon, to anti-government protests.

She witnessed a protest of a few hundred people in the Damascus suburb of Barzeh, hearing people chant for freedom and call for the downfall of the regime.

Syria has been engulfed in violence during more than three months of anti-government discontent. Human rights activists have said that Syrian security forces have been launching violent crackdowns on peaceful protesters since mid-March. World powers have denounced the regime for its fierce clampdown on protests.

The US is working on contingency plans if Iran continues to make nuclear advances and fails to return to internatioâ€twitter.com/i/web/status/1â€¦rp
cnni

3:30 pm ET September 23, 2021 RETWEET
A new show at Sotheby's New York spotlights the work of over 20 Black jewelers, from contemporary artisans to the oâ€twitter.com/i/web/status/1â€¦k6
cnni

3:25 pm ET September 23, 2021 RETWEET
"Benjamin Franklin would have been proud. An exquisite linguistic ceasefire between the US and France was crafted tâ€twitter.com/i/web/status/1â€¦EP
cnni