The US tops 5 million recorded Covid-19 cases. As of this week, five states account for more than 40% of the nationātwitter.com/i/web/status/1ā¦Iw

An earthquake that hit about 2 miles from the town of Sparta, North Carolina, around 8:07 a.m. ET was felt as far aātwitter.com/i/web/status/1ā¦GI

One person is dead and at least nine people were taken to nearby hospitals after an overnight shooting in Washingtoātwitter.com/i/web/status/1ā¦1M 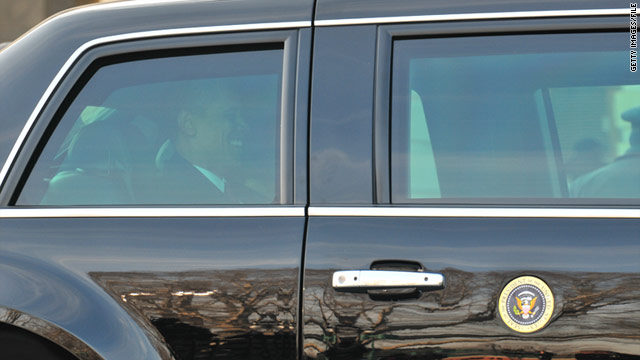 Magnetism is the only thing that keeps the presidential seal on the president's limousine.
July 2nd, 2011
02:18 PM ET

The round, gold-trimmed presidential seal is an impressive symbol affixed to the door of the limousine known as "The Beast."

It appears to be a permanent part of the limo. But in reality, it's a magnetic seal that comes on and off, vulnerable to wind and elements just like anything we'd put on our own cars.

And Thursday night, the seal came off during President Obama's motorcade to the airport after his fundraising visit to Philadelphia, ending up alongside Interstate 76.

Secret Service spokesman Ed Donovan said agents and Philadelphia police returned to the area off the freeway that night and looked for it, but were unable to find it in the dark.

But the next day, a Philadelphia police officer found it on the side of the road. The Philadelphia Daily News reports the officer had been part of the motorcade the night before and was helping a disabled car when he spotted it.

It was brought to the Secret Service field office and is being returned to Washington.

"It happens periodically," Donovan said. "They're only magnetic. They're not put on any special way."

Researchers at West Virginia University have been tracking the strange behavior of so-called "zombie cicadas."ātwitter.com/i/web/status/1ā¦EV
cnni

11:26 am ET August 9, 2020 RETWEET
RT @maggieNYT: A reporter asks POTUS why he keeps making false statement that he passed Veterans' Choice. He ends the presser, to applauseā¦
susancandiotti