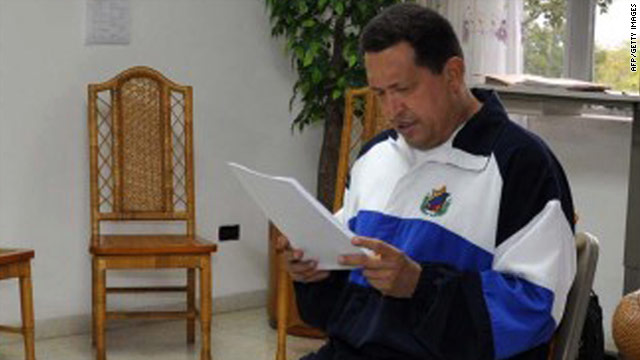 President Hugo Chavez has been in Havana, Cuba, for treatment of a cancerous tumor.
July 4th, 2011
08:06 AM ET

The network showed images of Chavez leaving Havana, Cuba and arriving in Caracas, reporting that Chavez returned to Venezuela at 2 a.m. local time.

Chavez has been in Havana for weeks undergoing treatment after doctors performed emergency surgery. He announced last week that they had removed a cancerous tumor.

Speaking to VTV after his arrival, Chavez said, his plane had made a "perfect landing" and he was feeling fine.

He said his return reminded him of a song, and began singing the words "beautiful night."

He was surrounded by a crowd of grinning supporters.

9:39 pm ET July 5, 2020 RETWEET
This is the second time this year that the US Customs and Border Protection has seized products from China suspecteâ€twitter.com/i/web/status/1â€¦Q1
cnni

9:31 pm ET July 5, 2020 RETWEET
"When I was delivering my child, I didn't even notice [the mask] because it didn't even faze me whatsoever," one moâ€twitter.com/i/web/status/1â€¦BS
cnni

9:01 pm ET July 5, 2020 RETWEET
A Florida company plans to fly passengers to the edge of space in a pressurized capsule suspended from a balloon, wâ€twitter.com/i/web/status/1â€¦1U
cnni