A man has been arrested and charged with murder in connection to the killing of Migos rapper Takeoff, the Houston Pā€twitter.com/i/web/status/1ā€¦Hy

An appeals court has halted the special master review of documents seized from Mar-a-Lago, in a major defeat for foā€twitter.com/i/web/status/1ā€¦Ld 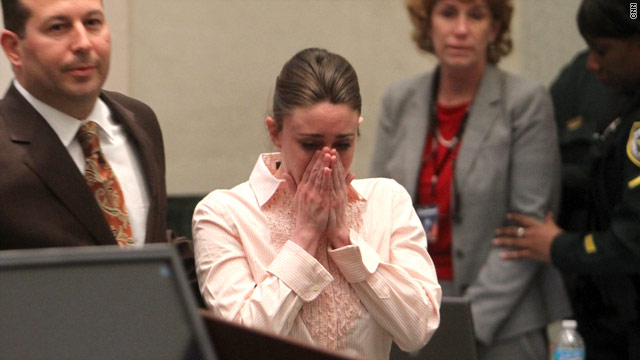 Florida v. Casey Anthony: A look back at evidence and testimony

A Florida jury on Tuesday found Casey Anthony not guilty in the 2008 death of her daughter, Caylee. Here's a look back at highlights from 33 days and more than 100 witnesses in the trial of the year:

The case of Florida v. Casey Marie Anthony began with both sides summing up their versions of what they believed the evidence would show. From the prosecution, jurors heard a timeline of the defendant's activities before her mother reported Caylee missing: parties, drinking and sleepovers with men.

Those days included getting a tattoo, participating in a "hot body" contest at an Orlando club, many Caylee-free nights at her then-boyfriend Anthony Lazzaro's apartment and many, many lies, the prosecution said.

"No one else benefited from the death of Caylee Marie Anthony," said assistant state attorney Linda Drane-Burdick in her opening statement. "Caylee's death allowed Casey to live a good life, at least for those 31 days."

From the defense, jurors were presented with an image of loving mother, whose dysfunctional family forced her to live in a state of denial. They argued the family held dark secrets, including that Casey was sexually abused by her father and brother.

The defense also revealed their theory of the case: Caylee drowned in the family pool as the result of what Baez called "an accident that snowballed out of control." He said it was an accident to which Casey's father, George Anthony, was privy. Baez said George Anthony tried to cover up the drowning at Casey's expense.

The jury heard detailed stories from her mother, her brother and finally, Anthony herself, of her business trips to Tampa and visits to an old flame that later proved to be false. Through recordings of Anthony's police interviews, jailhouse visits and a 911 call, the silent woman at the defense table finally spoke.

Throughout the conversations, one sentiment is conveyed to Anthony again and again: Stop lying, or face the worst of consequences.

Testimony earlier in the trial, which began last week in Orlando, Florida, revealed that Anthony lied to her parents and avoided them for 31 days in the summer of 2008 while Caylee was supposedly missing. This week, jurors learned more about what Anthony told her parents during that time and what she was actually doing.

Week 3 of the trial began with forensic testimony about how someone searched for "chloroform" and "neck-breaking" on the computer in the home Anthony shared with her parents in Orange County. By Thursday, panelists were fully immersed in the physical reality of the 2-year-old's death: bones, decomposition, odor and all.

The prosecution called key forensic witnesses, who described in graphic detail, the state of Caylee's remains when she was found in a wooded area on December 11, 2008, six months after she went missing.

Despite objections from the defense, jurors saw a video in which images of Caylee's skull and the duct tape found across the front of it at the scene were superimposed over a photo of a Caylee alive, smiling, with her mother.

The prosecution argued the video showed how the duct tape could have covered both Caylee's nose and mouth, while the defense argued it was only designed to appeal to juror emotions.

Three years to the day that, according to testimony, Caylee Anthony was last seen alive, a group of trial followers released balloons in Caylee's honor. One of the participants, David Wood, cried as he lamented over how - as he put it - anyone could hurt a child.

Inside the courthouse, the focus shifted to the defense case. Anthony's lawyers called forensic anthropologist Werner Spitz, who testified that he believed the tape found on Caylee Anthony's skull was placed there long after the body had decomposed. He also said the tape could have been an effort to keep the jaw bone attached so the body could be moved.

Spitz also criticized the Orange County medical examiner, Dr. Jan Garavaglia, for not opening Caylee's skull when he examined the remains. Failing to do so, he said, resulted in a "shoddy autopsy."

The defense continued its efforts to cast doubt on evidence presented by the prosecution. Cindy Anthony testified that she, not Casey, searched for "chloroform" on the Anthony family computer in March of 2008.

Earlier in the trial, computer experts testifying for the prosecution said someone in the Anthony home made searches for "chloroform," "how to make chloroform," "neck breaking" and "shovel," among other terms. Prosecutors alleged the searches proved premeditation and that records showed Casey Anthony was the only one who could have made the searches.

Cindy Anthony said she began by searching "chlorophyll," because she feared her dogs were getting sick from eating plants in the yard.

Jurors also heard testimony intended to rebut the state's key forensic evidence. Botanist Jane Bock testified that leaf debris found in and on the defendant's Pontiac Sunfire was not consistent with the leaves at the place where the body was found. She also testified to the defense's theory that the body had been moved, saying it could have been at the spot where it was found for as little as two weeks. Under cross examination, she said that it could have been there much longer.

The defense wrapped up its case last Thursday after calling to the stand every member of the Anthony family this week except for Casey. She only made a cameo when she personally addressed the judge to answer one of the trial's biggest questions - whether she would testify. She declined the opportunity to testify in her defense.

The week came to a close Friday with the state's rebuttal case. Witnesses included Cindy Anthony's former supervisor, who testified company records show Cindy Anthony was at work during the times the defendant's mother claims she was searching for "chlorophyll" on the family computer. Earlier, a computer forensics expert had testified that he found searches for "chloroform" among the computer's deleted files, but no searches for "chlorophyll."

Catherine, Princess of Wales, delighted at the 2022 Earthshot Prize awards, showcasing her sustainable style in a rā€twitter.com/i/web/status/1ā€¦QN
cnni

1:47 am ET December 5, 2022 RETWEET
Pepsi has launched a campaign encouraging customers to mix milk into their soda -- and it's backed by Lindsay Lohan. cnn.it/3VPzidJ
cnni

1:00 am ET December 5, 2022 RETWEET
Christmas at a hotel has a certain luxurious low-hassle allure. Here are 15 of the best hotels around the world tā€twitter.com/i/web/status/1ā€¦4n
cnni

12:00 am ET December 5, 2022 RETWEET
In a World Cup of surprises, Japan has played a leading role in headline-making shock results. cnn.it/3UEJnte
cnni

Catherine, Princess of Wales, delighted at the 2022 Earthshot Prize awards, showcasing her sustainable style in a rā€twitter.com/i/web/status/1ā€¦QN
cnni

1:47 am ET December 5, 2022 RETWEET
Pepsi has launched a campaign encouraging customers to mix milk into their soda -- and it's backed by Lindsay Lohan. cnn.it/3VPzidJ
cnni

1:00 am ET December 5, 2022 RETWEET
Christmas at a hotel has a certain luxurious low-hassle allure. Here are 15 of the best hotels around the world tā€twitter.com/i/web/status/1ā€¦4n
cnni

12:00 am ET December 5, 2022 RETWEET
In a World Cup of surprises, Japan has played a leading role in headline-making shock results. cnn.it/3UEJnte
cnni

11:54 am ET December 3, 2022 RETWEET
A man has been arrested and charged with murder in connection to the killing of Migos rapper Takeoff, the Houston Pā€twitter.com/i/web/status/1ā€¦Hy
cnnbrk