The Supreme Court agrees to hear Electoral College cases concerning whether states can force electors to vote for tŌĆtwitter.com/i/web/status/1ŌĆ”BY

The CDC will screen passengers arriving from Wuhan, China, for symptoms of a mysterious new deadly virus. The screeŌĆtwitter.com/i/web/status/1ŌĆ”Vb

A federal appeals court threw out a lawsuit by a group of children and teenagers trying to force the US governmentŌĆtwitter.com/i/web/status/1ŌĆ”nt

RT @CNNPolitics: JUST IN: Secretary of State Mike Pompeo publicly commits to investigating whether the former US ambassador to Ukraine wasŌĆ” 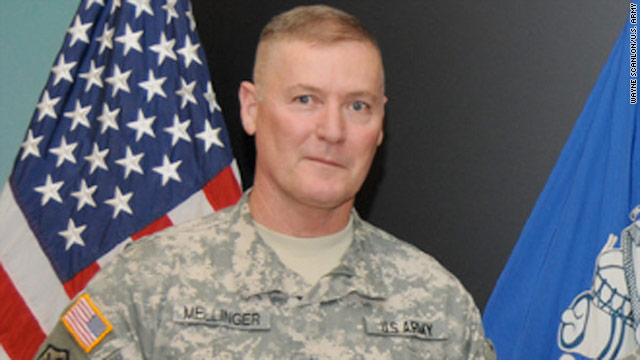 When Command Sgt. Maj. Jeff Mellinger got a draft card in the mail at his home in Eugene, Oregon, 39 years ago, the military wasn't exactly a popular option - or one he desired.

He told officials he had a job, he didn't need a new one. But he didn't have a choice. So on April 18, 1972, he donned a military uniform and prepared for service. And he's been doing it ever since.

That is, until now. Mellinger, believed to be the last of about 2 million men drafted in the Vietnam War era, is set to retire.

"I'm a relic," Mellinger told Time magazine in 2009.┬Ā "Most of them are surprised I'm still breathing, because in their minds I'm older than dirt.

"But they're even more surprised when they find out this dinosaur can still move around pretty darn quick."

Mellinger never expected his life to turn out this way.

Mellinger first was an office clerk in what was then West Germany, according to CNN affiliate KWTX-TV.┬Ā By his own admission, because of concerns about how the Army was working, he was looking forward to completing two years of service. As soon as his time was up, he would hang up his boots and head for the hills.

"I was dead-set on getting out," he told Time.

But then an opportunity arose that would change the course of his life. Mellinger was offered a spot in the coveted Army Rangers, according to the military. After being drafted during the Vietnam era, he continued on in the military. Years later, following the September 11 attacks, he would head down to ground zero to help out as part of the First Army.

He also served 34 months in Iraq, where he was the senior ranking enlisted man. KWTX reports he survived at least 27 roadside bombings there.

The accolades for the man known as "All Army" appear never-ending.

Over the course of his career, Mellinger would log at least "33 hours of accumulated freefall in more than 3,700 jumps," according to the Army.

While in the service, he's held positions ranging from a machine gun squad leader and drill sergeant master to a parachute tester.

After Iraq, he┬Āspent time in Alaska and around the rest of the country speaking to units about his experiences before going to Afghanistan as the command sergeant major for the Army Materiel Command. There he made sure to look in to many of the complaints from fellow soldiers - concerning the type and quality of equipment troops were using.

"Until you get out to the end of the line if you will, or the tip of the spear, sometimes you don't get the unfiltered unvarnished truth about how things are working," he told Army News Watch.

As someone who has been in the service for so long, Mellinger, of course, has seen the horrors of war.┬Ā He's told reporters he personally knows between 40 and 50 people buried at Arlington Cemetery in Virginia.

Now, with many achievements in the rearview mirror, Mellinger is looking to retire once and for all. But it wouldn't be the first time he's said he was going to do so.

"When I tell my wife it's my last assignment, she just rolls her eyes," he told Time two years ago. "This is my sixth 'last assignment.' "

This attitude is the kind of dedication Mellinger has brought to the military over the years.

But this time, Mellinger said he really is calling it quits. And he's proud to know he's leaving behind an Army that has grown in ways unimaginable to him when he first got that draft card in the mail.

"The Army of today is far better than it has ever been," he told Time. "Our Army has grown to be what it is now - and that's the best in the world."

5:58 pm ET January 17, 2020 RETWEET
Eminem released a new album and no one saw it coming. "Music to be Murdered by" will be his 11th album. "It's yourŌĆtwitter.com/i/web/status/1ŌĆ”Eh
cnni

5:41 pm ET January 17, 2020 RETWEET
Biden continued to make the case that going into Iraq was justified in the months after the invasion and instead arŌĆtwitter.com/i/web/status/1ŌĆ”HH
cnni