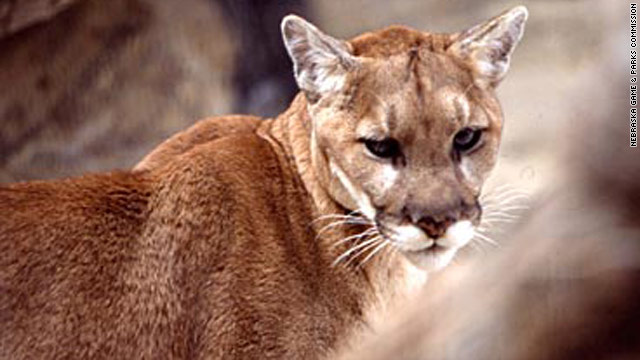 Once word gets around that a predator could be on the loose, phantom calls tend to start pouring in, said Jamey Graham, spokeswoman for the Ohio Division of Wildlife.

"People call in if they see a big house cat or a dog that's a similar color" to a mountain lion, she said.

Mountain lions, also known as cougars or pumas, are tawny colored, stand 2 to 2.5 feet tall at the shoulder, weigh 110 to 180 pounds, and have a thick tail 2 to 2.5 feet long, according to a Defenders of Wildlife fact sheet.

Someone sent a blurry photo to the Stark County Sheriff's Office, but it wasn't much help, Graham said.

"There's no characteristics that lead me to believe it's a mountain lion," she said. "lt looks like a house cat to me."

Police are assuming the mountain lion is wild, even though there is no sustainable native population in Ohio. Nevertheless, a fair number of people do keep mountain lions as pets, and they are not regulated under state law, Graham said.

Police checked with an area resident who owns exotic animals, but the man said he didn't own a mountain lion, and none of his other animals were missing, Kurzinsky said.

As a precaution, Canton police were keeping people out of the Fairhope Nature Preserve, near where the animal was first reported, Kurzinsky said. The 70-acre preserve was just dedicated on Earth Day, April 30, according to Canton's newspaper, The Repository.

It's possible someone dumped an unwanted captive mountain lion in the preserve, Graham said. One clue supporting that theory is that the cat is being seen in daylight, and wild mountain lions are nocturnal.

"This animal, if in fact it's an escapee, doesn't behave like a wild mountain lion," she said.

The situation is not as dangerous as it may seem, Graham said.

"It's nothing to be too terribly scared about except to keep your children indoors and don't leave your pets unattended," she said.

Kurzinsky urged members of the public to be cautious and call 911 immediately if they see the big cat.

"We hope as people call in we can get there in time, while it's still there," he said. "We have someone with a tranquilizer gun who we're hoping can tranquilize it, and then we can relocate it to a safer place."

That could mean taking it to a big-cat rescue center, but none has offered to accept the animal, Graham said.

Although mountain lions are uncommon, they are not considered an endangered species in Ohio, she said. That being the case, "if it creates a human safety hazard, it can be shot," she said.