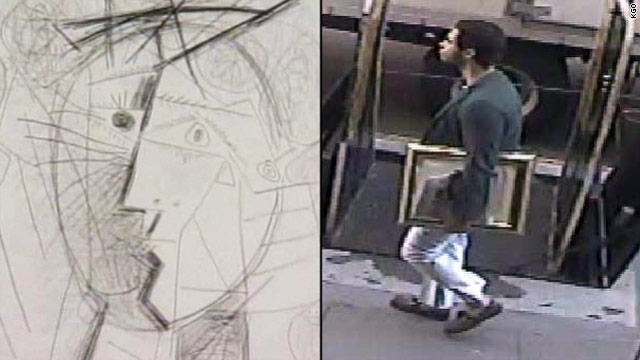 The Picasso pencil drawing "TĂŞte de Femme" (Head of a Woman) and the suspect caught on surveillance video walking away on Tuesday.
July 6th, 2011
12:54 PM ET

A Pablo Picasso drawing worth more than $200,000 was taken from a San Francisco art gallery on Tuesday in a brazen midday theft, according to local media reports.

The pencil drawing, titled "TĂŞte de Femme" (Head of a Woman), was hanging just inside the Weinstein Gallery on Geary Street in San Francisco. A well-dressed man wearing dark glasses entered the gallery, grabbed the 10 5/8-by-8 1/4-inch drawing and fled the gallery into a waiting taxicab, the San Francisco Chronicle reported.

Police are asking for the public's help in recovering the art.

"We're hoping someone in the public might recognize this piece, if they see someone walking around with it or trying to sell it," police spokesman Albie Esparza told the Chronicle.

The piece will be hard to sell, art historian Sharon Flescher, of the International Foundation for Art Research, told the Chronicle.

"The legitimate collectors won't touch it," the paper quotes Flescher as saying.

Police described the suspect as a 30- to 35-year-old male who is about 6 feet tall, according to CNN affiliate KGO-TV. He wore "a dark jacket, white shirt, dark pants and loafers without socks," KGO reported.
Gallery President Rowland Weinstein told the Chronicle the stolen piece was part of a collection that Picasso had originally given to his driver. The gallery acquired it in May, Weinstein told the San Francisco Examiner. The gallery also has pieces by the likes of Chagall, Matisse and Dali.

"My goal is to keep this kind of work accessible to the public, and thereâ€™s always a risk to that,â€ť Weinstein told the Examiner. He said security procedures would be reviewed so that policy does not have to be changed.

The Picasso was insured, but Weinstein told the Chronicle he is most worried about preserving the art itself.

"My greatest fear is that, with all this attention on it, the person will realize it's unsellable and will dispose of it in a less-than-proper manner," the Chronicle quotes him as saying.