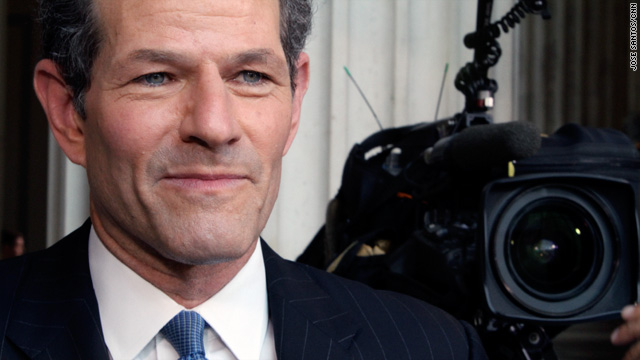 The shuffle’s second phase begins in the fall with the debut of a general news program with former CNBC anchor Erin Burnett. Her show, announced last month, will begin at 7 p.m. ET, moving “John King USA” to 6 p.m. and the two-hour “The Situation Room with Wolf Blitzer” to 4 p.m.

“We thank him and the entire 'In the Arena' team for creating a program that moved many political and economic issues into the national spotlight,” Jautz said.

Spitzer, in a statement released Wednesday, said his show "engaged serious people in conversations about national and global issues in a way that was informative and challenging."

"I believe that we provided diverse and valuable perspectives during the show's tenure. I thoroughly enjoyed my time at CNN," Spitzer said.

“Piers Morgan Tonight” will continue to be shown at 9 p.m. and midnight ET. Burnett’s new show will re-air at 11 p.m. ET.

“The new lineup showcases anchors who are experienced reporters in covering stories that span the globe,” Jautz said. “We created a nightly schedule that brings together the best of CNN’s journalism on a wide range of topics from politics and the economy to global and world events, as well the best newsmaker and celebrity interviews. This line-up ensures viewers access to the best of what CNN has to offer whenever they tune in at night.”