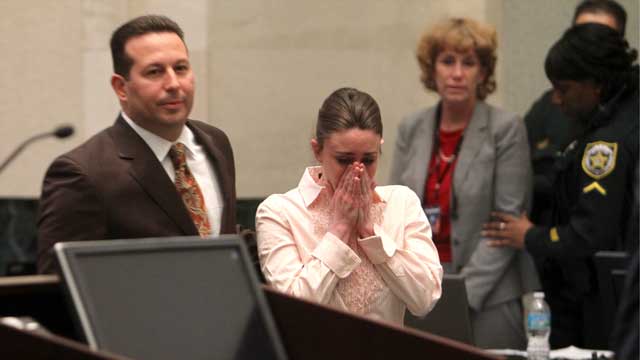 O.J. Simpson escapes murder conviction – Police suspected Simpson murdered Nicole Brown Simpson and Ronald Goldman in June 1994. The case dominated headlines and was must-see television. Between Simpson's infamous low-speed car chase, the trial's intriguing cast and a dream team full of legal heavyweights, the former NFL superstar was able to avoid conviction. O.J. showed signs of relief and joy when he learned his fate.
[cnn-videoÂ url="http://www.cnn.com/video/#/video/crime/2011/06/12/vault.oj.simpson.verdict.cnn "]
Outside the courtroom tensions arose. Some cheered "The Juice's" acquittal while others were stunned and suspected his fame and fortune allowed him to get away with murder.
[cnn-videoÂ url="http://www.cnn.com/video/#/video/crime/2011/06/11/vault.simpson.verdict.reaction.cnn"%5D
Jury acquits Robert BlakeÂ – "Baretta" helped make Robert Blake a star, but it was a murder accusation that launched him into the headlines again. Blake was accused of killing his wife, Bonny Lee Bakely, in 2001. Blake always maintained his innocence and, in 2005, a jury agreed, finding the actor not guilty of murder. When the jury announced the verdict, Blake began sobbing.
[cnn-videoÂ url="http://www.cnn.com/video/#/video/crime/2011/07/06/vault.bts.robert.blake.jurors.cnn"%5D
Rodney King verdict sparks riots – Los Angeles already was rife with racial tension before the Rodney King incident. But the allegations of excessive force by white police officers were caught on tape. That had many thinking they'd never be acquitted. Jurors surprised the city and the nation by acquitting all but one of the officers. The verdict proved to be the spark that ignited a powder keg of strained racial relations. Riots broke out in the city's most urban areas and even the president had to get involved.
[cnn-videoÂ url="http://www.cnn.com/video/#/video/crime/2011/07/06/vault.los.angeles.riots.cnn"%5D
Fans rally behind Michael Jackson – Child molestation allegations again surrounded Michael Jackson in 2005, resulting in a criminal trial. While some were surprised the King of Pop was found not guilty, his enthusiastic fans never doubted his innocence. They rallied behind him, cheering his victory. One person even released a white dove for each not guilty verdict.
[cnn-videoÂ url="http://www.cnn.com/video/#/video/crime/2011/07/06/vault.michael.jackson.verdict.cnn "]

A man was arrested for allegedly creating multiple disturbances and exposing himself to a flight attendant and passâ€twitter.com/i/web/status/1â€¦Lk
cnni

9:29 pm ET January 21, 2022 RETWEET
If the anti-abortion movement in the US wins the generational fight that it launched in the courtroom, the battle lâ€twitter.com/i/web/status/1â€¦Kv
cnni