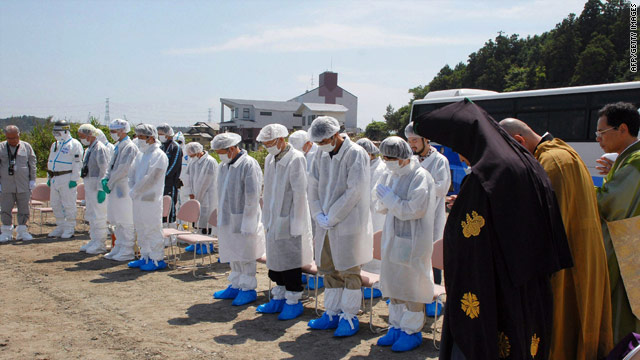 Report: Thyroid radiation found in 45% of children in Japanese province

None of the 1,080 children surveyed was exposed to more than 0.2 microsievert per hour, the threshold for pursuing further examinations, and most were far less, officials told Kyodo, as reported in Japan Times.

That amount is not considered a health risk, officials said.

Meanwhile, soil at four locations in the city of Fukushima was contaminated with radioactive cesium at levels 1.5 to 4.5 times the legal limit, Kyodo reported. The city is well outside 12.5-mile evacuation zone around the stricken plant.

A sample of soil from a street ditch found radiation far in excess of the amount that required permanent resettlement in the 1986 Chernobyl nuclear accident, the agency reported.

Japan's government plans to require safety assessments, or "stress tests," on all the country's nuclear power plants, industry minister Banri Kaieda said Wednesday, according to Kyodo. All the plants have been shut down since the March 11 earthquake and tsunami disaster.