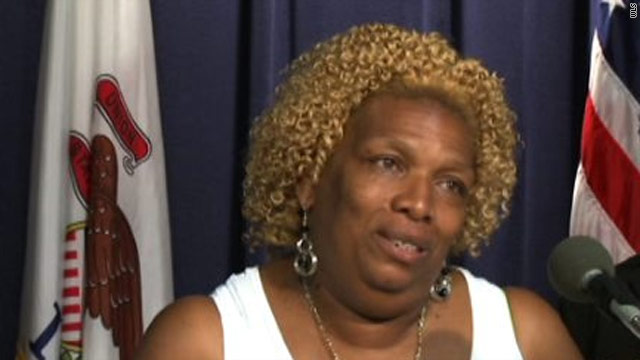 Chicago mother first to adopt her own children under new law

A Chicago woman has become the first person to adopt her own children under a recent Illinois law that she  inspired.

The law, passed in 2009, allows for parents who have lost custody of their children to rehabilitate themselves and regain it, in the event that the adoptive parent is a blood relative and passes away. Lawmakers said they were unaware of similar laws elsewhere.

Two weeks ago Yolanda Miller, 49, adopted four of her 11 biological children, who range in age from their late teens to mid-20s.

Miller had ten children while she was addicted to crack cocaine. Her mother adopted the children when they were born, and Miller lived next door to the rest of her family. One day in 1997, Miller just stopped using crack for good. She had been heading out the door to get high, when she said she was suddenly immobile.

“I couldn’t move, couldn’t speak,” she said. “I knew it was God stopping me in my tracks. I said, ‘If you give me another chance, I’ll never smoke another rock again.’ ”

She went over to her mother’s house and said, “Mom, I quit.”

To start anew, the family moved to a different neighborhood and lived in a similar setup, with Miller next door to her mother and her children. Though she had always been visible in her children’s lives, getting clean allowed Miller to take an active parenting role.

“I stepped in,” Miller said. “I stepped up. I got my life back in order and my children were there for me the whole time.”

In 2005, Miller’s mother died. Miller had her children move in with her, but since she wasn’t their legal guardian, she “knew anybody at any time could take them away from me.”

Seven years sober, Miller was the natural choice to be her children’s caretaker, but regaining custody meant one judge would have to override the previous decisions to take it away, said Linda Coon, Miller’s lawyer and the chairwoman for the Chicago Bar Association’s legislative subcommittee for adoption law.

When she took on the case, Coon said she wanted to establish a process for Miller’s specific situation so that the outcome would not have to depend upon how willing a judge was to change a previous decision.

“I am not aware of another state that has this,” Coon said. “There must be a growing recognition of this problem. There are kids whose parents are really willing and able to take them back.”

Coon said she hopes to establish a program in which volunteer attorneys help parents in similar situations to Miller’s.

Rep. Sara Feigenholtz sponsored the bill Coon drafted in the Illinois state legislature. It was passed in May 2009.

Feigenholtz has been central to Illinois adoption legislation, which she said is “very progressive.”

“I believe that overall there is a great interest in progressive policies and common-sense laws,” Feigenholtz said.

Miller officially adopted her two eldest daughters, 24-year-old twins, and the two who are still minors.

The newly adopted family, along with grandchildren, discussed the new law Tuesday at a press conference covered by CNN affiliate WLS.

"I know what we went through. But we're blessed. It's loving, it's strong. It's happy. We're happy. We're all happy. We always wanted to be with my mom," said eldest daughter Rachelle Pouncey.

Since becoming sober, Miller has had one child whom she never lost. Her other children, now grown up, live in various cities in Illinois and Wisconsin. She plans to adopt the five additional adult children as soon as they can all be in the same place at the same time for a family reunion of sorts in court.

“I’ve always believed that I was going to get my children back once I got my life back together,” she said at the press conference.

Miller said several other mothers have talked to her in the past few days. She said she talks to women struggling with addiction constantly, “in church (and) on the street.” She said she wants to help other mothers who need to pick themselves up.

“I know what’s down the end of that tunnel,” she said. “There’s no light.”

Miller said her mother and her children were the inspiration she needed to recover.

“Even in my addiction, I knew my kids loved me,” she said. “I chose to live because I had my children to live for.”

@patrickokeefe Well this is a big hello to Mama O’Keefe!
sarasidnerCNN

2:18 pm ET July 2, 2022 RETWEET
RT @RepKinzinger: What we’ve uncovere@January6thCmtete should concern every American. The truth is not political & the facts are damning. I…
sarasidnerCNN

6:22 am ET July 2, 2022 RETWEET
RT @shanlonwu: Replay: There are NO innocuous reasons for Trump & his inner circle trying to overturn the election - that alone should info…
sarasidnerCNN

@patrickokeefe Well this is a big hello to Mama O’Keefe!
sarasidnerCNN

2:18 pm ET July 2, 2022 RETWEET
RT @RepKinzinger: What we’ve uncovere@January6thCmtete should concern every American. The truth is not political & the facts are damning. I…
sarasidnerCNN

6:22 am ET July 2, 2022 RETWEET
RT @shanlonwu: Replay: There are NO innocuous reasons for Trump & his inner circle trying to overturn the election - that alone should info…
sarasidnerCNN