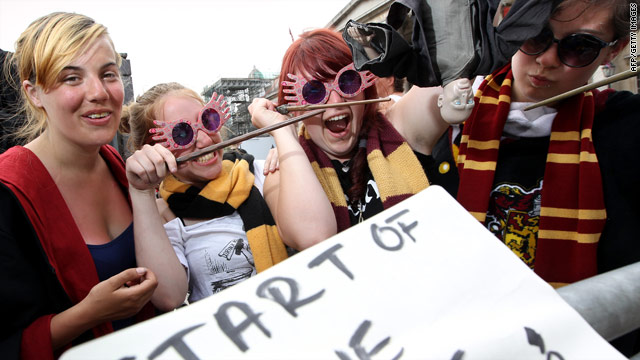 Potter premiere: Thousands Harry Potter fans have been camping out in London for the premiere of the last film in the series, "Harry Potter and the Deathly Hallows - Part 2," on Thursday.

If you're not in line in Trafalgar Square, EW.com will live stream the red-carpet event beginning at 11 a.m. ET. Stars Daniel Radcliffe, Emma Watson, and Rupert Grint will be there along with author J.K. Rowling.

The first fan in line for the London premiere was Nicole Beaudet, a 22-year-old from Vancouver, British Columbia, who's been waiting in line seven days, reports the Daily Star.

â€śHarry Potter has been the biggest part of my life. This is the last film, so I blew my life savings to be here,â€ť Beaudet told the Daily Star.

If you're not prepared to fork over that much cash, the film opens in the U.S. and Britain on July 15.

Missing off Mexico: Relatives of seven Americans missing after a boat capsized off the coast of Mexico are seeking donations to help continue their rescue efforts past a search window set to expire Thursday.

Family members are urging crews to keep scouring the waters off the coast of Baja, California past 2 a.m. Thursday, when the search window closes - 96 hours after the boat capsized.

"There is evidence from previous ship wrecks that individuals can survive past the 96 hours," California state Sen. Leland Yee said at a news conference Wednesday night.

One American was killed when the boat with more than 40 people aboard capsized early Sunday in the Sea of Cortez, near Isla San Luis, Mexico, authorities said.

Afghanistan sport killings: Jury selection begins Thursday for an Army sergeant charged in what military authorities say was a conspiracy by a group of soldiers to kill Afghan civilians for sport and then cover it up.

Sgt. Darren Jones is one of 12 soldiers, all members of the Washington-based 5th Stryker Combat Brigade, accused in a case that strained U.S. relations with Afghanistan after details emerged that some of the soldiers allegedly posed with dead Afghans and collected souvenirs from the killings.

Jones is one of six soldiers facing trial and the only one not charged with killing Afghans. Six other soldiers, including one who posed for photos with a dead Afghan, have accepted plea deals.