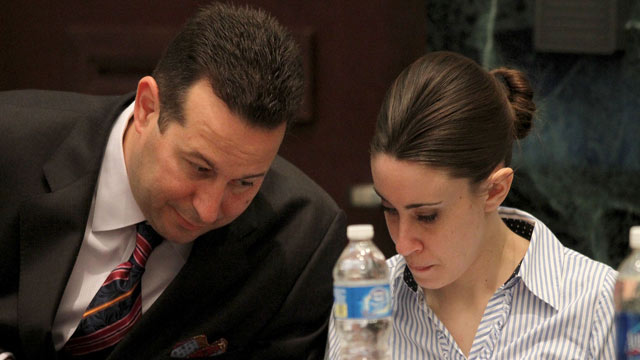 "I do believe in karma... and for sure even if she walks free she won't have an easy and normal life." — CJ

Casey Anthony to be released from jail next week

A court representative announced Thursday that Casey Anthony, who was acquitted Tuesday in the death of her daughter, will be released from prison Wednesday. The announcement only added to the frustration of an already hostile public, many of whom followed the trial and were outraged by Anthony’s acquittal. Several CNN.com readers commented about how Anthony’s future will be affected by the trial.

Kitty2 said, “Like it or not, the woman has been found not guilty–like some of the jurors said–not guilty does not necessarily mean innocent. If these TV personalities continue their needling after this trial, then the Anthony family with their attorneys should sue those people for pain and suffering.”

Andy said, “Just in time. I bet (Casey) was getting real tired of that innocent granny hair do she's been forced to wear.”

Barbara Nicholls explained that she will not support any of Anthony’s attempts to sell her story to the media. She said, “Do you seriously want justice for Caylee? I do! And this is how I plan to do it. I will spend $0.00 on any book or movie on anything Casey Anthony related. I will focus my actions, time and resources that promote those organizations that work tirelessly to protect children. To do anything less is a grave injustice to Caylee.”

Cvd said, “Well, one thing about this we really don't know what happened, but i do know one judge. that sits high and looks low. And that judge she will have to answer too.”

SoulKeeperX commented on the crowd reaction during Anthony’s sentencing. “What a scene outside the courthouse. The circus is in town and there are plenty of clowns.”

News of the World to close doors Sunday

The 168-year-old British tabloid News of the World will cease publication Sunday in the wake of public scrutiny surrounding a phone hacking scandal. News of the World is owned by Rupert Murdoch, owner of Fox News and The New York Post. The scandal got a variety of reactions from CNN.com readers, ranging from jokes to skepticism.

Pacito said, “So now we may find out how Breibart got the pictures of Weiner from his cell phone.”

Lightnup said, “News is political these days. Pick one over the other and offer your loyalty and you have already lost.  ALL news needs to be taken with a grain of salt.”

Aranthan suggested that the move was made to protect the brand. “This is brand protection Murdoch style. He is simply cutting his loses before it eats into his other companies. This action still won’t change my mind, I’m done with anything from News Corp.”

President Obama and congressional leaders held a new round of debt ceiling negotiations Thursday to avoid possible default next month. The president is seeking more than $3 trillion in cuts, including to Medicare and Social Security. The debt talks produced a lively discussion, with several CNN.com readers offering suggestions for alleviating the debt.

crockah said, "There's a simple solution to all of this.  A flat tax rate. The more you make, the more you pay. Simple and efficient. No need for tax lawyers or loop hole artists any longer."

blue175 said, "Entitlements and defense are why we have such a huge amount of debt! Everything else amounts to rounding errors by comparison."

Tunasalad expressed frustration with the way debt talks were handled by the government. "It is IRONIC that the same people (dem and rep) who created this mess, pretend as though they are going to repair the mess. Americans are so going to get screwed by this situation."

GGFL said, "Tax cuts for the rich produce millions of jobs. Cut taxes to 0% for millionaires and just watch how may people they hire to do the lawn."

Deathstalker commented, "Some changes are need but the base medicare and SS should be left alone for the most part. If we are having problems paying the bills raise the SS tax and the medicare tax."