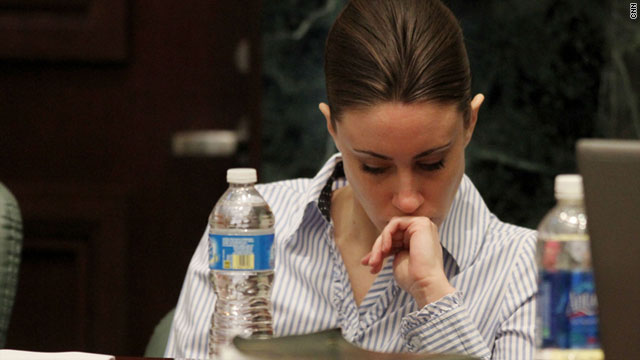 Tearful Anthony jurors ask prosecutors, where was the evidence?

Two jurors in the Casey Anthony trial say they wish the outcome had been different but prosecutors did not present enough evidence to convict Anthony of killing her daughter, Caylee, according to news reports Thursday.

"It doesn't feel good. It was a horrible decision to have to make" to find Anthony not guilty, said Jennifer Ford, who identified herself as Juror No. 3, in an interview with ABC News.

"We were sick to our stomach to get that verdict. We were crying, and not just the women," Ford said of the 12 jurors in the ABC interview.

The tears were still flowing Wednesday as Juror No. 2 (he did not want to be identified by name) spoke to Florida's St. PetersburgÂ Times.

"I just swear to God â€¦ I wish we had more evidence to put her away. I truly do â€¦ But it wasn't there," he said in an emotional interview with the Times.

Juror No.2, who the Times reported is a black male, married and a father of two young children, said he was the last holdout on the jury who wanted to convict Anthony on a lesser charge of aggravated manslaughter, which would have carried a prison term of up to 15 years, according to the newspaper.

The prosecution's inability to prove who was Caylee's caretaker at the time of her death, Casey Anthony or the girl's grandparents, doomed the manslaughter charge, Juror No. 2 said.

"We truly don't know what happened. Somebody knows, but we don't know," he said in the Times interview.

"If you're going to charge someone with murder, don't you have to know how they killed someone or why they might have killed someone, or have something where, when, why, how? Those are important questions. They were not answered," she said in the ABC interview.

An alternate juror, who was present for the trial and sequestered along with the serving jurors, said he would have voted for acquittal, too.

"They didn't show us how Caylee died. They didn't show us a motive. I'm sorry people feel that way. ... These were 17 total jurors. They really listened to this case and kept an open mind," ABC News quotes Russell Huekler as saying.

While those three people have spoken about the case, at least one of the sitting jurors wants money for the behind-the-scenes story.

The man, identified as Juror No. 6, wants $50,000 for his story and has hired a publicist, CNN contributor Howard Kurtz reportsÂ for The Daily Beast.

Japan's top court threw out a challenge by three couples who wanted to keep their own surnames after marriage, accoâ€twitter.com/i/web/status/1â€¦Ok
cnni

9:29 am ET June 24, 2021 RETWEET
CNN's Selina Wang takes a look at Tokyo's Olympic Village, a city within a city where elite athletes will spend theâ€twitter.com/i/web/status/1â€¦6p
cnni

9:27 am ET June 24, 2021 RETWEET
Coronavirus travel restrictions between Hong Kong and mainland China forced this couple apart. But, for a year andâ€twitter.com/i/web/status/1â€¦kQ
cnni

9:24 am ET June 24, 2021 RETWEET
Despite the controversies surrounding the Tokyo Olympic Games, there are hardcore Olympic super fans who can't waitâ€twitter.com/i/web/status/1â€¦2Y
cnni

9:19 am ET June 24, 2021 RETWEET
The 40-foot container can be transported by cargo ship or truck to any location, to test new ideas or meet seasonalâ€twitter.com/i/web/status/1â€¦1A
cnni