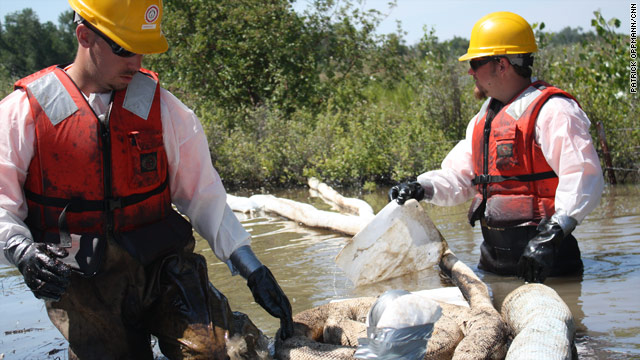 One culprit could be the heavy flooding hitting the area. It's possible the floodwaters could have exposed the pipeline and debris floating downstream, then caused the rupture.

Even though the oil spill is widespread, it's not always easy to get to. In Laurel, Montana, near where the spill happened, Exxon security guards block off a public road leading to cleanup operations. Media from around the world wait to be escorted into one area to film the spill. Hassett said the escort is to protect reporters from the floodwaters.

When we are allowed to document some of the cleanup, we see groups of workers in waders dabbing up the sludge with absorbent pads.

It's going to be a painstakingly long process, one that worries Alexis Bonogofsky. She grew up on the same farm where she now raises goats and chickens. Oil has polluted the edge of her farmland and prevents her from grazing her animals.

She hasn't been told how long the cleanup will take and what the health effects will be. But she says she is afraid the spill will haunt this region for some time.

"You go down to where the oil is," she says, "and you don't hear anything anymore. No birds, no toads, no crickets, nothing. It's just silent."

Election day creates a carnival atmosphere at polling booths across Australia, but beneath the bonhomie lies a seriâ€twitter.com/i/web/status/1â€¦lJ
cnni

6:33 pm ET May 20, 2022 RETWEET
Hillary Clinton personally approved her campaign's plans in fall 2016 to share information with a reporter about anâ€twitter.com/i/web/status/1â€¦k1
cnni

6:22 pm ET May 20, 2022 RETWEET
After a botched launch in 2019, Boeing successfully test launched their Starliner spacecraft that it developed to tâ€twitter.com/i/web/status/1â€¦9M
cnni

A federal judge has blocked the Biden administration from lifting the Title 42 pandemic restriction along the US-Meâ€twitter.com/i/web/status/1â€¦Vr
cnnbrk