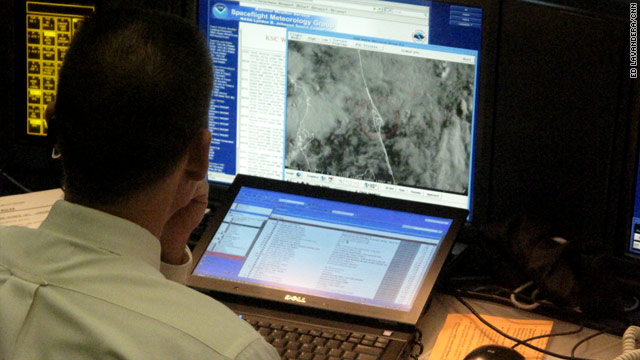 NASA flight director relishes the moment, focuses on the mission

After Friday's launch of the Space Shuttle Atlantis, CNN Correspondent Ed Lavandera talked with Flight Director Richard Jones inside NASA Mission Control at the Johnson Space Center in Houston. Jones is a 20-year veteran of the space shuttle program. Today, Jones made the call to give the go-ahead for the final launch of Atlantis.

CNN: What was it like being in there today?

Richard Jones: I was a bundle of nerves. I mean, we were working through the weather issue that most people probably already know about. The weather was on the verge of being absolutely pristine, but it just wasn't quite there.¬ÝSo, we were churning through that making sure it was all safe.

CNN: I know your number one priority was to get those astronauts off safely. But in the back of your mind, knowing the whole world was watching today, Did that sink in at any point?

Jones: It's sinking in right now as I'm talking to you. In this room you kind of learn to live in the bubble a little bit. So everything that we're doing, it just fades to the background. We know a lot of people are watching but it becomes background noise. So I wasn't focusing on anything except my job at the time.

CNN: Has it sunk that this was the last space shuttle launch?

Jones: Not yet. I mean, we've got a mission to fly. After, we'll stop when all the parties begin. It's going to start sinking in at that time. But we have to make sure the rest of the mission goes off without a hitch.

CNN: The crazy thing about being flight director of the space shuttle launch is that you haven't seen the launch. There wasn't a monitor around you that actually showed you video of the launch.

Jones: No, I will catch that tonight. I'm going to enjoy some moments with my team. Right now I'm going to visit them right now and relax with them and once I get home, I'll go look at the replays and see how it went. I'm expecting to see a beautiful, beautiful launch.

CNN: As you ended your shift in the flight director chair today, you spoke to your team inside Mission Control and you got emotional. Why?

Jones: I did. I wasn't expecting that until the very end. And it's because I'm saying goodbye to a lot of my co-workers. I've been in the trenches with them for a long time and just saying goodbye to them, it hurts. And so it came rushing to me.

CNN: What do you want them to take away from what you told them today?

Jones: The one thing that I wanted, there is the past, the present and the future. And we're a little part of it. We're right now in the present... And so, just relish the moment.

CNN: When you go home tonight, will you be thinking of those astronauts up there?

Jones: Oh God, yes! They're family. They think about us like we think about them. And we're working together to make sure that everything is going as well as it is.

CNN: In a few days, after the space shuttle Atlantis returns to Earth, Mission Control will be quiet for the foreseeable future, won't it? That has to be hard for people to see.

Jones: It will be. It's part of our transition. It's up to us to make sure it doesn't stay quiet for very long.

The fate of ailing Chinese developer Evergrande remains up in the air after a deadline came and went Thursday witho‚Ätwitter.com/i/web/status/1‚Ä¶IB
cnni

12:34 am ET September 24, 2021 RETWEET
An international group of 13 scientists has released a statement calling for the careful consideration of the use o‚Ätwitter.com/i/web/status/1‚Ä¶Wb
cnni