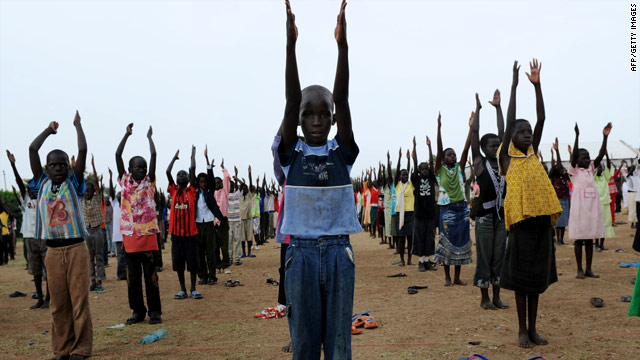 On the Radar: A new country, royals in L.A., new FDIC chief

South Sudan: Final preparations are being made Friday in what on Saturday will be the world's newest county, South Sudan.

In January, voters in predominantly Christian southern Sudan overwhelmingly approved a referendum to split with the Muslim north. The referendum was part of a 2005 peace deal that helped end a decades-long civil war.

That war created a class of refugees who drifted in and out of neighboring countries - many on foot - to flee violence and famine that left about 2 million people dead.

Now scores have returned to witness the birth of a nation.

"I cannot believe this day is finally here," says VictoriaÂ Bol, a resident of Grand Rapids, Michigan, who has returned to the new capital of Juba for independence day. "It is very emotional. I'm excited, but I'm also thinking of all the people who died for this to happen."

Royals in California: Prince William and his wife, Catherine, will land in Los Angeles on Friday evening for the last leg of their whirlwind North American tour that started in Canada last week.

Gov. Jerry Brown and his wife will welcome the royal couple.

After arriving at the Los Angeles International Airport, the couple will make their way to their first event at the Beverly Hilton in Beverly Hills.

The conference draws British and American venture capitalists, and leaders from the technology industry looking for new investment opportunities and ways to create jobs in both countries.

New FDIC chief: Sheila Bair, who shepherded the Federal Deposit Insurance Corp. through one of the worst financial shocks in history, steps down on Friday.

Bair emerged as a central figure in the government's response to the banking crisis that dominated her five years in office. She was lauded for broadening the FDIC's power to take over large financial institutions that pose a threat to the economy and pushing banks to modify home loans for troubled borrowers.

Bair's successor is Martin Gruenberg,Â  the FDIC's vice chairman, who was nominated in June by President Obama. He will become acting chairman on Monday, pending Senate approval.

Thousands of migrants were crowded in the makeshift camp under the Del Rio International Bridge. They sleep in theâ€twitter.com/i/web/status/1â€¦Qo
cnni

6:43 pm ET September 17, 2021 RETWEET
This surfer was catching waves at Ponce Inlet, on the east coast of Florida, when a shark slammed into him and bitâ€twitter.com/i/web/status/1â€¦6B
cnni