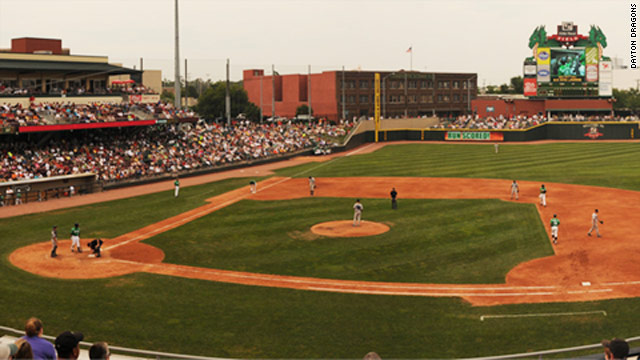 Ohio - the Cradle of Coaches, the birthplace of the NFL and the home of the Pro Football Hall of Fame - is known for making football history, but baseball and sports history are expected to be made Saturday night in Dayton.

When the Dayton Dragons' game against South Bend becomes official in the fifth inning, the minor-league team will set the record for consecutive sellouts by a professional sports team with an astounding 815.

The Class A Midwest League team will break the record held by the NBA's Portland Trail Blazers, who sold out 814 straight games from 1977 to 1995.

The Dragons have sold all 8,000-plus seats for every game since the Cincinnati Reds farm team arrived and Fifth Third Field opened 11┬Į seasons ago. In the first three years of the streak, the entire season sold out before Opening Day, according to the Dayton Daily News.

That's more than 6.5 million tickets sold in a town where the unemployment rate stood at 9.3% in May and was above 10% as recently as February, according to the Bureau of Labor Statistics.

These are some committed fans. The streak even endured a 24-game home losing streak last season.

"It's the whole atmosphere," season ticket holder Mike Belcher explained to CNN affiliate WDTN. "Dayton Dragon games have the full entertainment package. It is not just a baseball game."