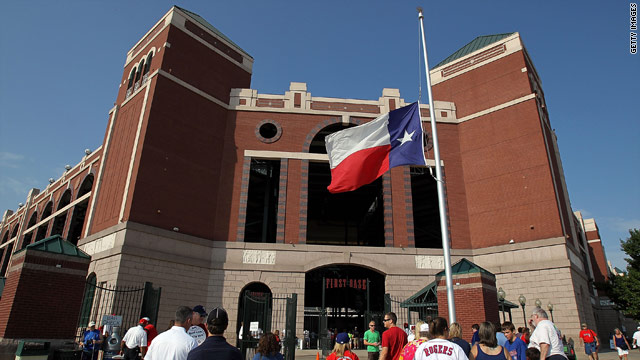 The Texas flag flies at half staff for fan Shannon Stone at Rangers Ballpark in Arlington, Texas.
July 11th, 2011
06:27 AM ET

On the Radar: Funeral for baseball fan, nuclear checks in Japan, U.S. heatwave

Rangers' fan's funeral: Funeral services will be held Monday for a Texas man who died at a baseball game last week.

Shannon Stone will be buried in his hometown of Brownwood, Texas. The 39-year-old firefighter fell to his death Thursday while trying to catch a ball at a Texas Rangers game.

In the second inning of the ill-fated game, star outfielder Josh Hamilton tossed a souvenir ball into the stands after a batter hit a foul ball. Stone stuck out his glove and reached for the ball, but lost his balance and flipped over the railing of the outfield seats. He fell about 20 feet and crashed head-first into a scoreboard, suffering fatal injuries. Stone died of blunt-force trauma, according to the Tarrant County medical examiner.

Nuclear checks in Japan: Japan's Chief Cabinet Secretary Yukio Edano announced Monday a new round of safety tests for the country's nuclear plants in the government's latest bid to gain the public's confidence.

The development came less than a week after the government made a surprise announcement that it would conduct "stress tests" on all of the country's nuclear plants.

"In addition to the existing mechanism, we have decided to introduce a safety evaluation based on new procedures and rules," Edano said at a news conference.

"There are many suspicious voices over the confirmation of safety by the Nuclear and Industry Safety Agency (NISA) and it is hard to say that we have sufficient understanding by the public," a government statement released Monday said.

Nuclear plants that have been idled for maintenance checks since the March 11 earthquake and tsunami must first pass the stress tests in order to resume operations.

Dangerous heat: A heat wave is building and could reach dangerous levels in parts of the Midwest, the Plains and the Southeast this week.

Fifteen states are under heat advisories, which means temperatures are expected to exceed 105 degrees Fahrenheit.

High pressure over the Plains is keeping the weather pattern stable, allowing heat to build and suppressing thunderstorms.

Some relief is expected by mid-week as the high pressure system weakens and shifts slightly southeast. This will allow thunderstorms to develop in the central Plains.

8:50 am ET July 4, 2022 RETWEET
Nick Kyrgios and Stefanos Tsitsipas have both been fined following their fiery Wimbledon match â€“ Kyrgios for an audtwitter.com/i/web/status/1â€¦2v83
cnni

8:30 am ET July 4, 2022 RETWEET
Absent this year due to injury, Roger Federer says he hopes he can come back to Wimbledon â€˜one more timeâcnn.it/3yEAxUenxqv
cnni

8:10 am ET July 4, 2022 RETWEET
The Ukrainian Armed Forces have raised the countryâ€™s flag over Snake Island, after forcing a Russian withdrawal frotwitter.com/i/web/status/1â€¦FwqY
cnni

At least six people were killed and another eight injured following an avalanche of ice in the Italian Alps, CNN afâ€twitter.com/i/web/status/1â€¦Jm
CNNweather

6:05 am ET July 4, 2022 RETWEET
What was previously a once-in-a-generation event, has become commonplace, raising questions as to the long term susâ€twitter.com/i/web/status/1â€¦Qe
CNNweather

3:38 am ET July 4, 2022 RETWEET
A serious warning has been posted by the National Weather Service office in Fairbanks, Alaska, this weekend, statinâ€twitter.com/i/web/status/1â€¦1e
CNNweather