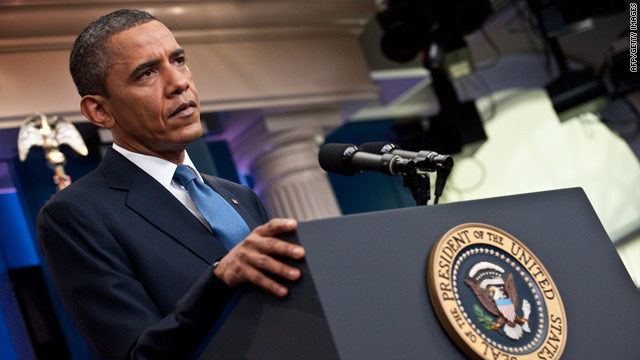 On Monday, President Barack Obama ruled out any chance of signing a short-term extension of the debt ceiling. He insisted now's the time to tackle the nation's most pressing fiscal problems comprehensively. He wants  bipartisan compromise on both taxes and cuts to entitlement programs. His push for the largest deal possible is an apparent rejection of a call by House Speaker John Boehner to focus more narrowly on spending cuts agreed to in an earlier round of negotiations.

Obama, to his credit, has been pushing both sides to come off their hard-line positions and seek compromises. On the substantive issues, he has been the most flexible of any of the players on the field.

It was thus stunning Monday morning that in his press conference, the president painted himself into a different corner, insisting that he would refuse to accept any short-term deal, even one that would be good for 180 days."

John P. Avlon: In debt talks, Obama as  grown-up in the room

"President Obama is catching a lot of flak from his left for even offering entitlement reform and spending cuts as part of a grand bargain. But in doing so, he is showing himself to be a responsible chief executive committed to good faith negotiations.

But in these negotiations, President Obama is proving he can stand up to the far left as well as the far right."

William Howell: The president is the best bet to find way out of deadlock

"If you're looking for leadership, the kind of leadership that will recognize, define and offer solutions to entrenched social problems, you're most likely to find it in the president. It is the president, after all, who serves the entire nation and retains the formal powers, informational resources and political incentives to attend to its long-term welfare.

Congress, by contrast, is a collective decision-making body in which 535 voting members from nearly as many districts and states vie for influence, struggle to direct portions of the federal government's largesse back home and keep their gazes fixed on the next elections."

'There’s a very high-stakes game of chicken under way in Washington right now. The two sides have no choice but to reach an agreement in the coming days. Let’s see which side blinks. ...

"The question now is can the president and the speaker finesse some sort of compromise that allows the debt ceiling to be raised."

Julian Zelizer: President's bully pulpit not what it used to be

"President Ronald Reagan was one of the last presidents to govern in an era when presidents could really make their case. When he wanted to sell his tax cut in 1981, he went to the American public, armed with charts and statistics to explain why tax cuts could lower deficits and boost the economy.

"But the current structure of the media has emasculated the bully pulpit. Regardless of how good a president is on the stump, it is almost impossible for him to command public attention, because there is no singular 'media' to speak of."