At least 99 people are unaccounted for after the partial collapse of a Florida condo building, officials say. FolloŌĆtwitter.com/i/web/status/1ŌĆ”yA

President Biden says he's agreed to a deal on infrastructure with a bipartisan group of senators following a massivŌĆtwitter.com/i/web/status/1ŌĆ”8D

Half of the units in a Florida multistory condo collapsed this morning, Miami-Dade's mayor says. An intense searchŌĆtwitter.com/i/web/status/1ŌĆ”sR

At least one person is dead after a condominium partially collapsed in Surfside, Florida, the city's mayor says. FoŌĆtwitter.com/i/web/status/1ŌĆ”r0 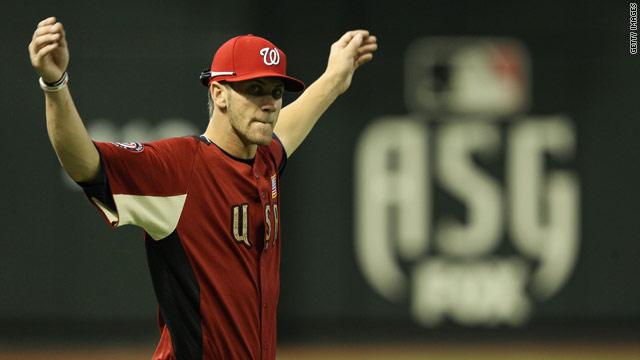 Nationals phenom Bryce Harper was hitless in the Futures Game, but he showed the tools that make him a top prospect.
July 11th, 2011
04:49 PM ET

On the surface, Bryce Harper's performance at Major League Baseball's Futures Game on Sunday may have been a bit of a letdown. Finishing 0 for 4, Harper struck out twice and bee-lined two grounders to the first baseman. But as SI.com's Joe Lemire says, that doesn't even begin to tarnish the 18-year-old's array of accomplishments or dull his future prospects.

"What Harper still showed on the day were his first-rate tools, even if he failed to use them in a way that made a difference in the outcome," Lemire writes. "It was, however, just one game. Players are allowed to have a bad game now and again, especially when facing a barrage of the game's best international pitching prospects, opposing the Braves' Julio Teheran, Mariners lefty James Paxton, Blue Jays' Henderson Alvarez and the Royals' Kelvin Herrera. Part of why Harper more than other toolsy players is on a major league fast-track is his in-game maturity: He takes walks and more often than not makes the smart throw."

But despite the outfielder's maturity and skill, the Nationals have chosen to be conservative with their rising star, likely not calling him up to the majors this year to give him more time to develop. ┬ĀAnd that seems fine by Harper.

"I'm just going to let them make their decisions," Harper said. "(General manager) Mike Rizzo does a great job with everything."

MLB's home run derby:┬Ā The National League and the American League square off in Monday nightŌĆÖs charity exhibition at the Diamondbacks' Chase Field.

$8.71 million - Prize that the winner of this year's World Series of Poker is expected to walk away with.

16 - Number of MLB All-Stars who will not play in this year's game. Placido Polanco and David Price became the latest stars to withdraw.

20,000 - Number of fans that track owner Bruton Smith claims missed out on the inaugural Kentucky 400 on Saturday because of traffic.

Dangerous, hot temperatures takes hold of the Northwest this weekend as a potential heat wave begins in the NortheaŌĆtwitter.com/i/web/status/1ŌĆ”nY
CNNweather

2:29 pm ET June 24, 2021 RETWEET
The UK is honoring Alan Turing by unveiling a mural at the country's spy headquarters. He will also be the firstŌĆtwitter.com/i/web/status/1ŌĆ”DE
cnni