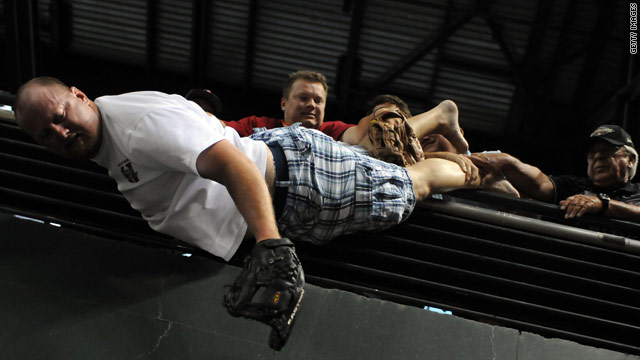 Other fans catch Keith Carmickle as he tumbles over a wall Monday night during the Home Run Derby at Chase Field in Phoenix.
July 12th, 2011
01:47 PM ET

On the day a memorial service was held in Texas for a baseball fan who suffered fatal injuries while reaching for a ball, a man at Major League Baseball's Home Run Derby nearly took a similar fall.

During the contest at Chase Field in Phoenix, Keith Carmickle of Kingman, Arizona, stepped on a small table and reached over a railing for a ball hit by Milwaukee Brewers star Prince Fielder, AZCentral.com reported.

Carmickle lost his balance and tumbled over the railing head first. His brother, Kraig Carmickle, a friend, Aaron Nelson, and a couple of other men caught him by his limbs, saving him from an estimated 20-foot fall to the stadium's pool deck, according to the site.

"He tried to catch it. I grabbed his legs and his brother grabbed his arms," Nelson told AZCentral. "So when he went over the ledge, we pulled him back. He wasn't going down. I was holding on."

On a different batted ball, another fan leapt and landed in the stadium's pool with a big splash - and with the ball. He jumped around exultantly in the water, apparently unhurt.

Firefighter Shannon Stone fell to his death in front of his young son Thursday at a Texas Rangers game at Rangers Ballpark in Arlington, Texas. Stone fell while reaching over a rail for a ball tossed into the stands by Rangers outfielder Josh Hamilton. Stone was buried Monday in his hometown of Brownwood, Texas.

Hamilton will play in Tuesday night's All-Star Game in Phoenix but did not participate in the Home Run Derby.