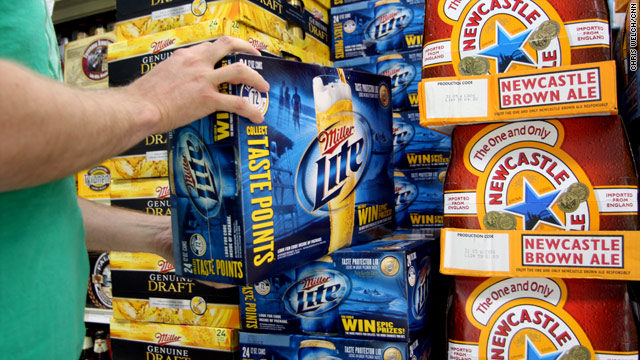 Beer: The next casualty of Minnesota shutdown

Miller Lite beer fans in Minnesota better stock up while they can.

The MillerCoors brewing company will soon be forced to pull 39 brands of beers from every restaurant, bar and liquor store in the state of Minnesota.

It's all because the company wasn't able to renew their brand label registration far enough in advance before the state's government shut down.

"What that means is they're not able to either distribute or sell their product in this state," said Doug Neville, spokesperson for the Minnesota Department of Public Safety.

Neville said the bare-bones staff of the state Alcohol and Gambling Enforcement department have reached out to MillerCoors for a removal plan, so he said it will likely be a day or two before the company begins pulling the product.

When Andrew Oliver of Minneapolis heard the news, he headed over to Surdyk's Liquor to stock up on Miller Lite, his wife's favorite beer.

"We just had a kid, so she's looking forward to Miller Lite."

"There's a big following for Miller products," according to Molly Auron, assistant beer buyer for Surdyk's Liquor. About 30-40% of the store's beer cooler is filled with MillerCoors brands, Auron said.

"The weekend's coming, people need their beer, so I think people are preparing and stocking up," said Auron.