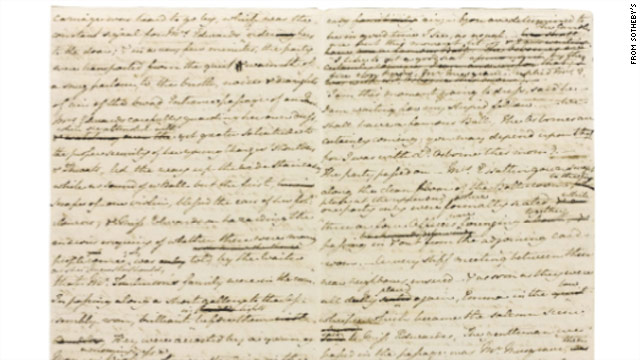 Sotheby's London auction house on Thursday sold a handwritten manuscript by Jane Austen for 993,250 British pounds, or about $1.6 million, more than triple the highest pre-sale estimate.

The partial manuscript of the unpublished novel "The Watsons" is full of corrections and strike-throughs in the author's own hand, Sotheby's e-catalog says.

"It is a tantalizing, delightful and highly accomplished fragment, which must surely have proved the equal of her other six novels, had she finished it," British author Margaret Drabble wrote in the description.

This is the only known Austen manuscript to remain in private hands, the auction house said.

Austen, who died in 1817 at age 41, is considered a giant of English literature. Her most famous works are "Sense and Sensibility" and "Pride and Prejudice."

Four bidders competed for the item, and applause broke out in the room at the conclusion. The winner was in the room but remained anonymous, Sotheby's said.

"The sale of 'The Watsons' has afforded an extremely broad audience an insight into the author's writing process and reworkings, which this manuscript uniquely displays," said Gabriel Heaton, Sotheby's senior specialist in books and manuscripts.