RT @CNNPolitics: GOP Sen. Mitt Romney says his impeachment vote will be "based upon the facts and the evidence as is presented." Romney sayŌĆ”

Police in the UK broke up a rave that saw more than 300 people packed under a railway arch early Sunday morning. FoŌĆtwitter.com/i/web/status/1ŌĆ”OJ 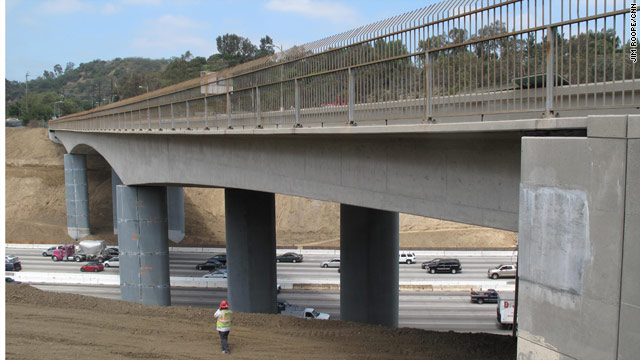 The Mullholland Bridge over Southern California's 405 freeway will be demolished while the heavily traveled road is closed for 53 hours this weekend.
July 14th, 2011
02:14 PM ET

A major 10-mile stretch of one of the busiest freeways in the world is being shut down for an entire weekend for a widening project. It's being called "Carmageddon."

More than 250,000 cars a day use the stretch of Los Angeles' I-405 freeway that connects the San Fernando Valley with the West Side. But this weekend it will be closed, leaving traffic backups that observers predict could be anywhere from 28 to 65 miles long.

Fly over the chaos for $4

The project involves demolishing the Mulholland Bridge, whose supports are too close to the current freeway to add a carpool lane. To do that, the entire freeway on both sides must be shut down for 53 hours.

City and transportation officials are urging people to stay home and avoid the area altogether. It's predicted that all surface streets and other freeways will be jammed with people who must get from the valley to the West Side, so all those who do not need to travel shouldn't, officials say.

It's not just about impatience in a long backup, but other issues could arise, such as cars running out of gas or overheating. Drivers who must attempt to get from one side of town to the other are urged to make sure they are gassed up and┬Āhave plenty of water in the car - and triple the expected travel time.

President Biden will reinstate the Covid-19 travel restrictions lifted by Trump for Brazil, Ireland, the UK and mucŌĆtwitter.com/i/web/status/1ŌĆ”ra
cnni

4:27 pm ET January 24, 2021 RETWEET
A reminder of the hell on earth that was Auschwitz. #NeverAgain twitter.com/AuschwitzMuseuŌĆ”
sarasidnerCNN

2:34 pm ET January 24, 2021 RETWEET
This is BEAUTIFUL. The power of kindness is AWESOME. Get the tissues ready. twitter.com/Thund3rB0lt/stŌĆ”
sarasidnerCNN