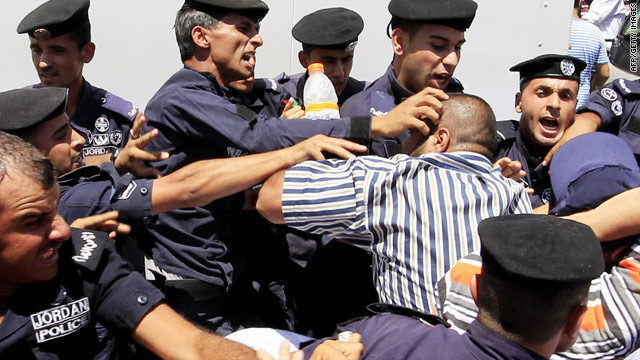 Countries in the Middle East and North Africa have been swept up in protests against longtime rulers since the January revolt that ousted Tunisian strongman Zine El Abidine Ben Ali. In many cases, these demonstrations and movements have been met with brute force that has escalated into seemingly unending violence. Here are the latest developments and information about the roots of the unrest.

Several hundred protesters marching through Amman on Friday were attacked by riot police, CNN's Arwa Damon said. A Jordanian security official said riot police were called in only after a group of loyalists clashed with the pro-reform protesters.

The protesters departed Al Hussein mosque on their way to Palm Tree Square, when they were surrounded by police along the way, Damon reported. Upon reaching the square, riot police charged the protesters, beating them with batons and using shields to push them back, she said.

About 100 demonstrators who made it to the square were chanting pro-reform slogans.

Capt. Mohammed Jamil el-Khatib, general security press officer, said that riot police were responding to a clash between loyalists and protesters and that they were within their rights to use shields and batons, the "appropriate force" to break the two groups apart and defend themselves. He denied that they used excessive force.

Jordan's economy has been hit hard by the global economic downturn and rising commodity prices, and youth unemployment is high, as it is in Egypt.

Officials close to the palace have said King Abdullah II is trying to turn a regional upheaval into an opportunity for reform. He swore in a new government following anti-government protests. The new government has a mandate for political reform and is headed by a former general, with opposition and media figures among its ranks.

Protests throughout Syria on Friday called for the release of political prisoners. At least six demonstrators were killed when security forces opened fire on protesters, the Syrian Observatory for Human Rights reported.

Three deaths were reported in Idlib, two in Damascus and one in Daraa. The death toll was expected to rise, the organization said.

According to the Syrian state-run SANA news agency, the military and security forces were protecting demonstrators from the presence of armed groups in Daraa province.

In Damascus, two members of the Syrian security forces were injured when armed groups opened fire on them in the suburb of Jawbar, SANA reported.

The news agency said that at least one death in Idlib was at the hands of armed groups and not security forces.

The unrest began in mid-March after teens were arrested for writing anti-government graffiti in Daraa, according to Amnesty International. As the crackdown intensified, demonstrators changed their demands from calls for freedom and an end to abuses by the security forces to calls for the regime's overthrow.

On April 19, Syria's Cabinet lifted an emergency law that had been in effect since 1963. But security forces then moved quickly to crack down. Government opponents allege massive human rights abuses.

A U.S. drone strike targeting militants in southern Yemen on Thursday killed at least 50 people, two Yemeni security sources said. This comes as the United States and the Yemeni government step up their efforts to target militants, including Islamists who've taken over several cities in recent weeks.

Still, the government claims that a U.S. drone was not involved in the attack and that its air forces conducted the raid.

The interior ministry said on its website that nine fighters were killed, but dozens were injured and that the number of deaths is expected to rise.

Inspired by the revolution in Egypt, demonstrators began protesting President Ali Abdullah Saleh's 33-year-old regime February 11. A month later, Saleh offered to draft a new constitution that would establish a parliamentary system, but protesters persisted in calling for his resignation, and numerous high-ranking political and military officials resigned or were dismissed.

Saleh balked after making overtures to accept an agreement with the Gulf Cooperation Council to step down, and fighting has escalated between security forces and opposition groups - primarily tribal forces and Islamic militants - since those efforts broke down in May.

U.S.┬Ā recognition of the Transitional National Council is a major diplomatic development that could give the rebels access to Libyan regime assets that have been frozen by the United States.

Meanwhile, NATO denied Libyan government accounts that the alliance and anti-government rebels were carrying out a coordinated air, sea and land attack on the strategic town of al-Brega.

"NATO's mission is to prevent attacks and threats against civilians, and that is what we are doing," the alliance said in a statement. "NATO has no military forces on the ground and no direct contact with opposition forces."

A Libyan government spokesman on Thursday called the attack "heavy, merciless and surprising."

Protests in Libya started in February, when demonstrators, fed up with delays, broke into a housing project the government was building and occupied it. They quickly gained strength, and a movement to demand democracy and oust Moammar Gadhafi after more than four decades in power exploded into civil war.