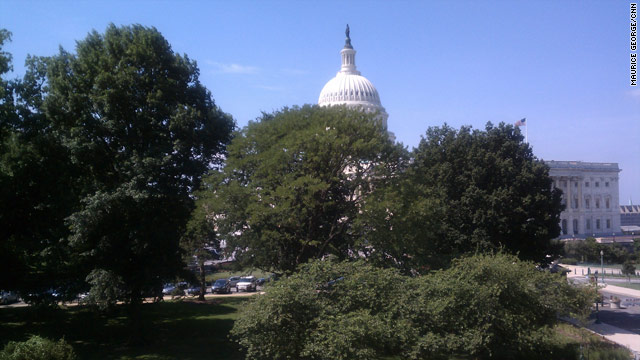 Top legislators in Washington are in tough negotiations with the Obama administration over raising the national debt limit.
July 15th, 2011
08:02 AM ET

There are no formal negotiations planned for Friday to achieve a deficit reduction deal, but President Obama will hold a news conference at 11 a.m. ET to offer an update.

On Thursday, Democrats and Republicans met for the fifth time in five days.

A Republican aide familiar with Thursday's meeting at the White House said Obama told congressional leaders he expected them to consult with their caucuses and find agreement over the next 24 to 36 hours on how to proceed.

If the group is unable to reach a compromise, the president suggested another meeting would be called this weekend, the aide told CNN.

The FBI has launched an investigation into Rupert Murdoch's News Corp. after a report that employees or associates may have attempted to hack into phone conversations and voice mail of September 11 survivors, victims and their families, a federal law enforcement source told CNN onÂ Thursday.

It's D-Day for the 53-hour shutdown of Interstate 405 in Southern California. A 10-mile stretch of the heavily traveled freeway will be closed in western Los Angeles for a bridge demolition. You would think the world is coming to an end. The project - dubbed "Carmageddon" - has brought countdown clocks, traffic apps, detour maps and warnings to stay away or enjoy the weekend on the couch. Amtrak and JetBlue are offering specials to get away from - or at least around - it all.

Europe-wide banking stress test results come out today amid fears they could further destabilize in the euro zone and global economies. The European Banking Authority will release results on the latest bank stress tests, which will show how much money overextended governments will have to pony up to support their vulnerable lenders. But the market is unlikely to heave a sigh of relief at those results until European finance ministers are willing to try a more lasting solution to the debt crisis in Greece - and it looks like they are still not ready yet.

The Yangtze had dried up in parts as swaths of China battle drought and the nation's worst heat waves in more thanâ€twitter.com/i/web/status/1â€¦Xu
CNNweather

5:55 pm ET August 17, 2022 RETWEET
RT @OliverStuenkel: "Significant risk Brazil will live through its own version of January 6": @sarasidnerCNN and I spoke about Brazil's preâ€¦
sarasidnerCNN

12:46 pm ET August 17, 2022 RETWEET
â€śAmong other flaws, the public guidance during the coronavirus pandemic was â€śconfusing and overwhelming,â€ť the atwitter.com/i/web/status/1â€¦xPgtzoiU
susancandiotti

The Danish brand heads open up about the complexities of being climate-conscious in the fashion industry, sharing tâ€twitter.com/i/web/status/1â€¦Sm
cnni