Disney World plans a phased reopening on July 11 for its Magic Kingdom parks, and on July 15 for EPCOT and Hollywoo‚Ätwitter.com/i/web/status/1‚Ä¶md

Dr. Anthony Fauci says he thinks a coronavirus vaccine could still be on track for the end of 2020. Follow live upd‚Ätwitter.com/i/web/status/1‚Ä¶1k

Bertha becomes the second named tropical system of the year and will make landfall in the Carolinas later today as‚Ätwitter.com/i/web/status/1‚Ä¶Rk

Mexico has recorded its largest single-day increases in both newly confirmed cases and reported deaths from coronav‚Ätwitter.com/i/web/status/1‚Ä¶AO 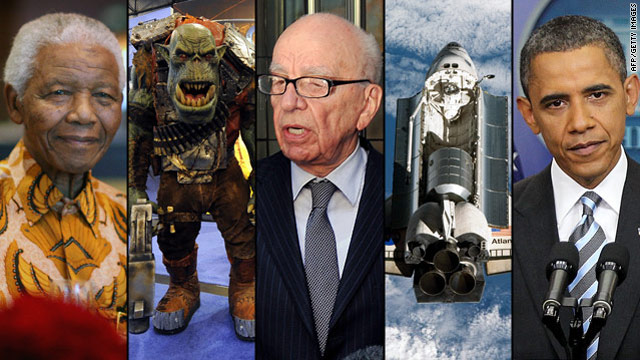 Not everyone gets a break over the weekend. Just ask congressional leaders and President Obama, who continued talks Saturday over a possible deficit reduction that would clear the way for Republican-backed increase in the federal debt ceiling.

Rupert Murdoch also had quite the weekend as the widening phone-hacking scandal that brought down his cornerstone newspaper claimed more victims.

Here's a look at those stories, which will continue to develop this week, along with others that CNN plans to follow:

The succession comes two days before the Afghan National Army takes control Wednesday of Lashkar Gah - the capital of the volatile Helmand province - in the first transfer of security from NATO-led forces. The transfer is part of a phased handover which will see all foreign troops leave Afghanistan by the end of 2014.

The NASA space shuttle Atlantis crew will bid farewell to the international space station crew Monday before starting its return to Earth. Atlantis is scheduled to land Thursday at Kennedy Space Center - that last mission before all three space shuttles retire for good.

The return comes the day after the 42nd anniversary of the first manned moon landing in 1969.

President Barack Obama on Monday will nominate Richard Cordray to head the new Consumer Financial Protection Bureau, which is scheduled to formally open for business Thursday. The announcement means Obama has passed over Elizabeth Warren, the firebrand law professor who envisioned the bureau.

The bureau was the brainchild of Warren, a former law professor, who envisioned it as a government force to protect consumers from increasingly sophisticated financial practices. The bureau is intended to make basic financial practices such as taking out a mortgage or loan more clear and transparent while ferreting out unfair lending practices.

The United Nations and the Nelson Mandela Foundation want you to join them in commemorating Mandela's 93rd birthday on Monday by devoting 67 minutes to helping others - one minute for every year of the South African leader‚Äôs own service to humanity.

Nelson Mandela International Day falls each year on the human rights leader's birthday on July 18. It began in 2008 in recognition of the former South African President‚Äôs contribution to the culture of peace and freedom.

Media baron Rupert Murdoch and his son, James, are scheduled to appear before British politicians Tuesday to answer questions over the widening phone-hacking scandal plaguing his media empire.

British lawmakers investigating the scandal asked Murdoch, his son and former News of the World editor Rebekah Brooks to testify at a House of Commons hearing after former British Prime Minister Gordon Brown accused their newspaper group of illegally obtaining private information about him.

Brooks, who resigned Friday as chief executive at News International, the British arm of Murdoch's News Corp., had also agreed to testify. It's not clear how her arrest Sunday will affect the hearing.

Senate leaders are working on a possible debt ceiling measure, based on a plan that Senate Minority Leader Mitch McConnell, R-Kentucky, unveiled last week. That plan would give Obama power to raise the borrowing limit by a total of $2.5 trillion but also require three congressional votes on the issue before the 2012 general election.

Budget director: Meeting U.S. debt obligations is the only plan

According to Senate aides from both parties, a revised version of the McConnell plan being put together with Senate Majority Leader Harry Reid, D-Nevada, could come up for consideration this week, but only after legislators vote on Republican measures calling for spending cuts, caps on future spending and a balanced budget amendment to the Constitution.

TheTeaParty.net, an Internet-based tea party group, will hold the first presidential debate of the 2012 campaign on Twitter on Wednesday. Republican candidates will answer questions via Twitter's requisite restriction that encourages short answers: 140 characters or less.

The biggest comic book and popular culture convention in the United States kicks off Thursday in San Diego, California. Expect costumes galore as fans delight in all things related to comic books, movie memorabilia, toys and action. More than 125,00 visitors are expected to attend for a chance to meet their favorite artists and writers, catch sneak previews of upcoming films and discussion panels.

The 98th Tour de France continues this week, ending with the traditional last stage in Paris on Sunday. The best known of cycling's three "Grand Tours" covers more than 2,000 miles in France and surrounding countries in a course made up of 21 stages.

When Disney World begins a phased reopening in July, several measures to prevent the spread of coronavirus will be‚Ätwitter.com/i/web/status/1‚Ä¶AM
cnni

12:15 pm ET May 27, 2020 RETWEET
Japan is injecting another $1 trillion into its economy to protect it from the effects of the coronavirus pandemic. cnn.it/36GJrRF
cnni

12:08 pm ET May 27, 2020 RETWEET
Professional footballer Christian Mbulu has died at the age of 23, according to a statement from his team, Morecamb‚Ätwitter.com/i/web/status/1‚Ä¶B3
cnni

11:59 am ET May 27, 2020 RETWEET
Here's everything you need to know about the coronavirus pandemic today: cnn.it/3c8EXEk üì© Sign up to getwitter.com/i/web/status/1‚Ä¶0O96v
cnni