Vice President Kamala Harris will visit the US-Mexico border Friday. The trip follows GOP criticism of her not travâ€twitter.com/i/web/status/1â€¦qQ

The Supreme Court rules California must pay private businesses to allow unions access to address workers in a caseâ€twitter.com/i/web/status/1â€¦9L

The Supreme Court rules in favor of a former high school cheerleader in a case involving the right to free speech wâ€twitter.com/i/web/status/1â€¦v8

The Supreme Court rules that unless there is an emergency, police must evaluate on a case-by-case basis whether a wâ€twitter.com/i/web/status/1â€¦IS 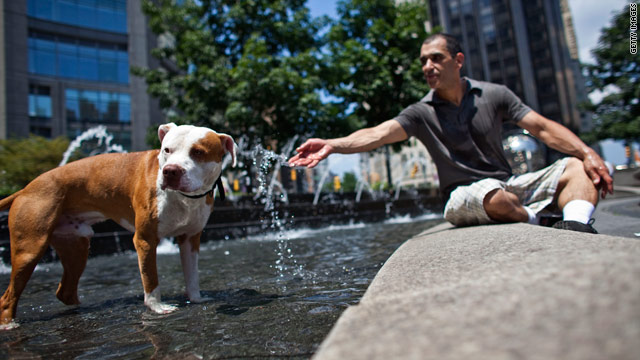 The "dangerous" heat wave baking the central United States is expected to extend its reach eastward in the coming week, and ultimately cover most of the eastern part of the country, the National Weather Service said Monday.

"Heat index values in the triple digits are forecast across a large portion of the Midwest today, making it feel like 100 to 110 degrees or higher during the afternoon hours," the weather service said Monday morning.

By midweek, the high pressure bringing the oppressive heat will expand eastward, bringing temperatures in the mid-90s to the Mid-Atlantic states "as early as Wednesday," the weather service warned.

"Further out, this dome of high pressure is forecast to dominate most of the eastern and central U.S. - bringing excessive heat to much of the eastern half of the country except for the Northeast and southern Florida - through the end of next week."

Although Coca-Cola tried to block some slurs and trademarks from use in its personalized bottle promotion, social mâ€twitter.com/i/web/status/1â€¦4n
cnni

5:06 pm ET June 23, 2021 RETWEET
Britney Spears is scheduled to address the court this afternoon during a hearing about her conservatorship. Whileâ€twitter.com/i/web/status/1â€¦NW
cnni