Maine's Supreme Court has sided with the state's Democratic secretary of state and rejected a Republican challengeŌĆtwitter.com/i/web/status/1ŌĆ”bz

What seemed unthinkable six months ago is now true: 200,000 people in the US ŌĆö parents, children, family and friendtwitter.com/i/web/status/1ŌĆ”qLMG

GOP Sen. Mitt Romney says he's on board with considering a Supreme Court nominee before the election, all but ensurŌĆtwitter.com/i/web/status/1ŌĆ”P9 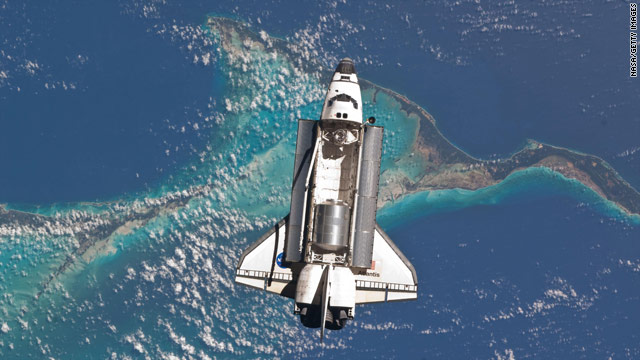 The space shuttle Atlantis prepares to dock with the International Space Station on July 10.
July 18th, 2011
06:03 AM ET

Hatch closed - At 9:19 a.m. ET on Monday, the hatch between the space shuttle Atlantis and the International Space Station will be closed for the final time and the shuttle will prepare for a return to Earth.

Tomorrow, the shuttle will undock from the station and fly around it so visual inspections of both the space station and the shuttle's thermal protection system can be performed.

Atlantis is scheduled to land at Kennedy Space Center in Florida at 7:06 a.m. on Wednesday, bringing an end to three decades of space shuttle flight.

Hot temperatures - A heat wave will continue to roast the country's midsection even as it spreads to the east, according to the National Weather Service.

The hottest spots from Oklahoma through South Dakota should see highs of more than 100 degrees Fahrenheit, and top temperatures are forecast in the 90s for most of the rest of the country - with the exception of some mountain and coastal regions, according to the weather service.

"Heat index values" - how hot it feels outside - have been running over 125 degrees Fahrenheit in the worst-hit areas, the National Weather Service said. The scale designed to describe how intense heat feels also includes factors such as humidity.

Japan typhoon - Workers in Japan scrambled Monday to build a protective covering over a damaged nuclear reactor ahead of an approaching powerful typhoon, an energy company spokesman said.

Typhoon Ma-on┬Ā should strike Japan well south of the damaged No. 3 reactor at the crippled Fukushima Daiichi nuclear power plant.

But the Tokyo Power Company, which is responsible for the plant wracked by the March 11 tsunami that struck northeast Japan, is constructing a "roof-like structure to prevent rain from entering holes on the turbine building," spokesman Satoshi Watanabe said.

Paulette regained strength and became a tropical storm once more on Monday, according to the US National HurricaneŌĆtwitter.com/i/web/status/1ŌĆ”4d
cnni

5:01 pm ET September 22, 2020 RETWEET
Go There heads to Houston, Texas, to look at the impact Covid-19 is having on those facing evictions in the UnitedŌĆtwitter.com/i/web/status/1ŌĆ”pk
cnni

4:49 pm ET September 22, 2020 RETWEET
NASA says that in four years, it plans to land the first woman ever on the Moon and the first man since 1972 througŌĆtwitter.com/i/web/status/1ŌĆ”8O
cnni

4:31 pm ET September 22, 2020 RETWEET
FDA to announce tougher standards for a coronavirus vaccine that make it unlikely one will be cleared by Election ŌĆwashingtonpost.com/health/2020/09ŌĆ”oD
susancandiotti