Former President Trump's political organization raised $82 million during the first half of this year and entered J‚Ätwitter.com/i/web/status/1‚Ä¶2W

Elaine Thompson-Herah set a new Olympic record as she won gold in the women's 100m. Jamaica swept the podium, also‚Ätwitter.com/i/web/status/1‚Ä¶xY

British sprinter Dina Asher-Smith has so far withdrawn from Olympics 200m race only. It is unclear if she will comp‚Ätwitter.com/i/web/status/1‚Ä¶JK

American Caeleb Dressel sets a world record and wins the 100-meter butterfly at the Olympics (this tweet was repost‚Ätwitter.com/i/web/status/1‚Ä¶ux 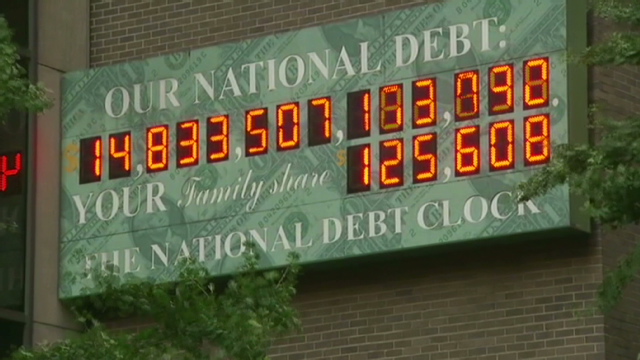 Administration and congressional officials are expected to continue working on a measure to raise the federal debt ceiling.
July 18th, 2011
02:00 PM ET

Overheard on CNN.com: Raise the debt ceiling or starve government?

Exchange of the day

"How about we immediately defund, or at least greatly reduce spending on, NPR, PBS, Planned Parenthood, the EPA, welfare, entitlements (which are by far the largest part of the federal budget), and all other liberal-type programs? Betcha we'd have a balanced budget almost overnight!"– petercha

"What about corporate welfare and the military? Get rid of those conservative programs. Our budget would be balanced in 5 minutes!"–RazorRiely

Capitol Hill leaders are scrambling this week to head off a default on U.S. debt. Gaining momentum is a version of a fallback plan designed by Senate Minority Leader Mitch McConnell, which would give President Obama the power to raise the borrowing limit but require three congressional votes on the issue before the 2012 general election. The unusual scheme would allow most Republicans and some conservative Democrats to vote against any debt ceiling hike while still allowing it to clear.

The story continues to garner thousands of comments from CNN.com readers, with arguments echoing those on the Hill. Most readers support raising the ceiling and meeting U.S. debt responsibilities, while a few suggest cutting social programs to reduce government and even welcome civil war.

chamber2011 said, "I'm not talking about this debt ceiling issue only, this entire issue. The sheep of the democrats keep supporting any bad move by their representatives, just like Stockholm syndrome. The business owners (who are employers remember) are trying to regain America back from freeloading tax spenders that sit in politician spots and get free money. Lets just go to war. Its about time."

IanA1 said, "All Boehner has done since he got in was to rile up a bunch of uneducated reactionary maniacs on the right, and now those very maniacs have had him take our country right up to the edge of economic suicide."

MeanOldMan said, "Enough of this BS. Pass the increase and get to something that really matters. Everyone knows the ceiling has to be raised and those that don't believe it haven't got the smarts to be running a lemonade stand, let alone a government. This country is falling apart and drifting into being a third world country and these guys are spending all their time arguing over whether to pay the money they have already spent."

TrollWars said, "Okay, let's agree with these entitlement cutting clowns. Let's do away with social security and medicaid. Let's do away with unemployment and food stamps. So what happens to the "majority" of people making between 9 and 13 bucks an hour when they reach old age? You honestly can't expect them to save hundreds of thousands of dollars at that wage? What happens if they have a health problem that sets them back, but doesn't disable them while working. I'm guessing you want us to BEG the local church or search high and low for any doctor willing to do charitable work.

drthink replied, "Let them die, if they are too lazy to save or earn real money it shouldn't be our problem, we can't expect the rich to do all the work and then also pay for everyone. The rich do all the work, the least we can do is let them keep their incentive to earn a profit."

tnoutside1 said, "I never heard all this talk about killing entitlement programs when the budget was fully funded. It was GOP wars and a massive transfer of wealth (through tax breaks) into the hands of Wall Street that caused this mess. Regulation and appropriate taxation are the paths to prosperity. I thought FDR proved this when he cleaned up the GOP/Hoover mess. Or Clinton when he cleaned up the Reagan/Bush mess. People have VERY short memories. "

FelixCat said, "This country will be dead in the long run for it. You simply have no clue what an immediate knee-jerk 40% cut in fed spending will do to a fragile economy. The Great Depression will be remembered as the good old days."

wetfuse13485 said, "They passed how many budget increases during Bush? Now my party wants to hold out on this President when our country is in need and to stop us from going down. Becoming an Independent is looking better and better, and the Tea Party is going to learn a good lesson in politics in the next election. So will the GOP for laughing when they came into our party. US NAVY RETIRED SCPO5326 (SO/S.E.A.L.) 21 YEARS OF MILITARY SERVICE

kittykitty91 said, "I have a grand idea. Give the tea party people what they want. Make them immune to paying taxes. And in exchange we won't burden them with using roads, police, fire, schools, military protection¬≠, DMV, etc, etc. The first time they attempt to back out of their driveway, make them pay a toll to drive on taxpayer funded roads. If their house catches fire, cough up the dough or we watch it burn. The GOP and Tea Party people are the hypocrites; they say they love this country, but all they want to do is see it burn and watch anyone suffer that does not believe in their hateful, close minded, religious agenda."

rlcommenter said, "The Government is a virus that spreads and consumes. ... Why even think of giving it more money. ... It only knows how to spread and consume." SirWilk44 said, "We are dying because your liberal friends refuse to make any politically tough decisions and actually make significant cuts to the debt. 1.5 Trillion over 10 years does nothing when we are running 1.3 Trillion dollar deficit this year. I am sure your grand-kids will wonder why we did not make really tough decisions now to make their life better. "

NoBSObama said, "I think it would be better if we default and declare bankruptcy. All these government programs were never viable. The government should have never got in the business of S.S.I., Medicare and welfare. It would reboot the economy back to a time were people were responsible for their own security. And without the burden of high taxes to support these programs, the average productive person could decide where to spend their own money. Goverment lied to the masses, Whats New?"

'The Simpsons' is doing something it's never done. The show will kick off its 33rd season with an all-musical episo‚Ätwitter.com/i/web/status/1‚Ä¶iE
cnni

6:00 pm ET July 31, 2021 RETWEET
"The animals are on fire." Farmers face devastation in some areas of Turkey as wildfires continue to sweep the coun‚Ätwitter.com/i/web/status/1‚Ä¶RY
CNNweather

3:01 pm ET July 31, 2021 RETWEET
A World War II Royal Air Force pilot's uniform is set to be sold at auction after it was discovered wrapped in news‚Ätwitter.com/i/web/status/1‚Ä¶hj
cnni