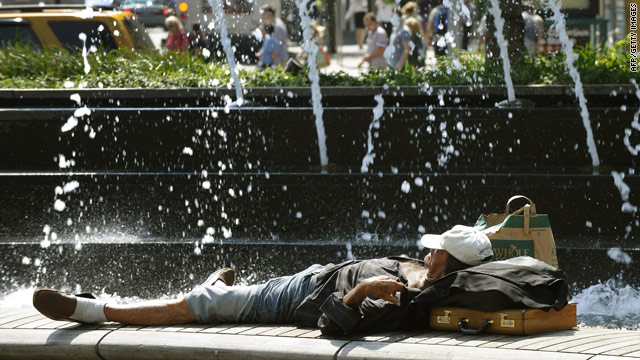 Heat warnings: The dangerous heat wave baking the central United States is expected to extend to the East Coast by the end of this week, the National Weather Service says.

Parts of six other states - Alabama, Arkansas, Mississippi, Ohio, Tennessee and Texas - are under heat advisories through at least Wednesday, the weather service said.

"Heat-index values" - how hot it feels outside - have been running more than 125 degrees in the worst-hit areas. The scale designed to describe how intense the heat feels takes relative humidity into account along with temperature.

Israeli deportations: Fifteen foreigners aboard the Gaza-bound boat Dignite were being deported out of Israel on Wednesday, Israeli officials said.

"Some of them have already left this morning and the rest will fly out during the day," said Sabin Hadad, spokeswoman for the Israeli Interior Ministry.

Israeli naval forces Tuesday successfully took over the boat, which was intent on breaking what the activists call the "siege of Gaza," without violent resistance.

Somalia famine: The United Nations on Wednesday declared a famine in parts of southern Somalia amid the worst drought in 60 years, which has sent thousands walking for days to neighboring countries in search of food.

AboutÂ  5,000 Somalis have been fleeing weekly in scorching temperatures to refugee camps in neighboring Kenya and Ethiopia.

"Nearly half of the Somali population - 3.7 million people - are now in crisis, of whom an estimated 2.8 million people are in the south," said Mark Bowden, the U.N. humanitarian coordinator for Somalia.

The United Nations declared a famine in southern Bakool and Lower Shabelle.