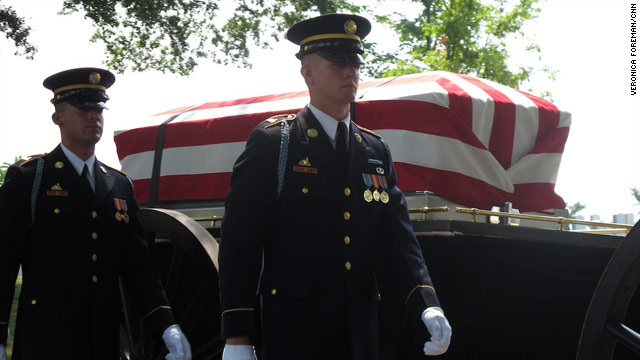 ŌĆ£Evidence at the time indicated the remains of the men had been destroyed in the attack and were neither recovered nor buried near the location," according to a Department of Defense press release.

Despite further searches for human remains on behalf of the AGRC, the Parroy Forest was thought to be void of human remains until 2003, when a French citizen exploring the area discovered HellumsŌĆÖ identification bracelet and more human remains. A JPAC team working in Europe took control of the items in April 2006 and then returned to the site, recovering ŌĆ£more human remains, personal effects, and an identification tag for Owens,ŌĆØ according to the press release.

Years of further research regarding the burials at Ardennes revealed a correlation between the new remains and three unknown soldiers. The bodies were disinterred in 2008. The soldiers were positively identified - using dental records, forensic tools and data from the Armed Forces DNA Identification Laboratory - on February 9, 2010.

This identification, like many others, is part of a widespread effort by the Defense Prisoner of War and Mission Personnel Office. Today, more than 72,000 Americans still remain unaccounted for from World War II. The DPMO says on their website that this is simply an extension of the mottos ŌĆ£No one left behind,ŌĆØ ŌĆ£Fulfill their TrustŌĆØ and ŌĆ£Keeping the Promise,ŌĆØ among others, having identified approximately 7,000 individuals since the end of WWII.

The effort to properly recognize the sacrifices of the identified soldiers does not end there, however. Organizations around the country have similarly dedicated themselves to ensuring a proper military funeral for every U.S. service member, from veterans to the recently identified.

Bugles Across America, for example, was founded in 2000 by Tom Day after congressional legislation stated that all veterans had the right to at least two uniformed military personnel to fold the flag, and to have a recording of taps played.

DayŌĆÖs organization is committed to taking that promise even further. Volunteer bugle players in all 50 states offer a live rendition of the traditional burial song at every veteran's funeral.

12:30 am ET May 23, 2022 RETWEET
More cases of a rare disease have been reported worldwide, including in the United States -- where one health officŌĆtwitter.com/i/web/status/1ŌĆ”Gd
cnni

11:30 pm ET May 22, 2022 RETWEET
Much like Dorothy in "The Wonderful Wizard of Oz," the artist behind Ghana's "Yellow Brick Road" is motivated by aŌĆtwitter.com/i/web/status/1ŌĆ”Xh
cnni

5 dead after severe thunderstorms in Ontario and Quebec; hundreds of thousands without power: cnn.com/2022/05/22/ameŌĆ”
CNNweather

12:53 pm ET May 22, 2022 RETWEET
One more day of 90-degree heat is in store for the Northeast today before strong to severe storms impact the regionŌĆtwitter.com/i/web/status/1ŌĆ”hz
CNNweather