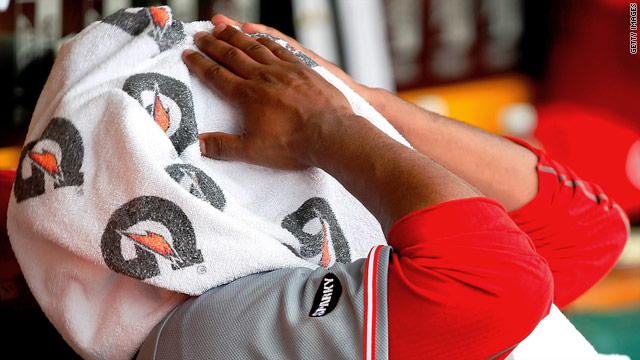 A very uncomfortable record dew point of 82 degrees was recorded Tuesday in Minneapolis. This also caused the heat index to reach 118 degrees, tying the record set in 1966 for the highest heat index ever recorded at the Twin Cities. Dew points soared into the 80s in the Midwest on Wednesday, causing heat indices to reach an oppressive 123 degrees Fahrenheit in Council Bluffs, Iowa.

Heat indices this high usually occur near the Gulf of Mexico or the coast of Saudi Arabia near a relatively shallow, tropical body of water where dew points are high. In fact, Dhahran, Saudi Arabia, located near the Persian Gulf, had the highest dew point ever recorded, 93 degrees, in 2003.

But why are the dew points currently at such high levels? Part of the answer is the record floods experienced this spring in the Midwest. The ground is still saturated, rivers and lakes are out of their banks and all of this water is turning to vapor and being released into the atmosphere. High dew points also are common in the Corn Belt of the upper Mississippi River Valley.

Surprisingly, the high dew points are enhanced by the mature corn itself, drawing water from the saturated soil and releasing it into the atmosphere. This process is what meteorologists call transpiration.

So the next time your neighbor jokingly says "it's not the heat, it is the humidity," that's a fact.

In 22 days, NASA's Mars 2020 Perseverance rover will land on Mars in Jezero Crater to search for signs of ancient lâ€twitter.com/i/web/status/1â€¦7y
cnni