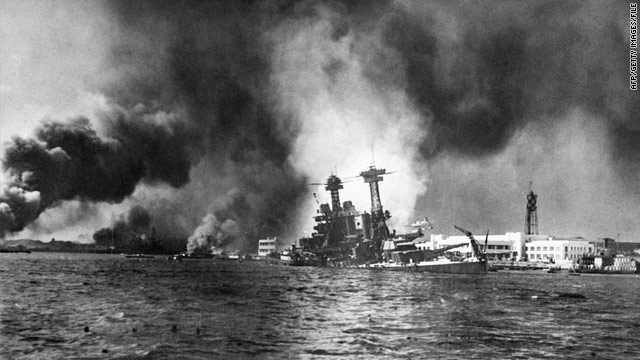 Pearl Harbor skull may be from Japanese aviator

U.S. military forensics scientists in Hawaii are investigating whether a skull unearthed during dredging at Pearl Harbor may be from a Japanese flier killed in the December 7, 1941, attack.

Historian Daniel Martinez tells CNN affiliate KHON-TV that based on where the skull was found, it may be that of an aviator from a Japanese torpedo plan that was attacking battleship row and was hit in its engine by anti-aircraft fire from the destroyer USS Bagley.

"Once they came over Hickam Field, they lowered to an altitude of about 35 feet and they're moving across that water at about 150 knots. Well that projectile stopped that plane right in its tracks," Martinez told KHON.

"People that witnessed it said they could see the crew members tumbling out of the plane. Now near this area is where the excavation and dredging took place and that is where they found the skull," KHON quotes Martinez as saying.

Water in the area is about 45 feet deep. Found with the skull were items from the 1940s including a soda bottle, forks and metal scraps, Denise Emsley, a spokeswoman for the Naval Facilities Engineering Command in Hawaii, told Reuters news service.

The skull is being analyzed at the Joint Prisoners of War, Missing in Action Accounting Command center in Hawaii, according to the reports.

Japan lost 29 aircraft with 55 aviators during the Pearl Harbor attack. About 2,400 Americans were killed.

Martinez said he can help narrow the search, based on the witness accounts from 1941.

"I will be able to submit to them three names of the most probable that should be there and they then could possibly try a DNA (match) back to Japan if those families are still around," he told KHON.

Scientists have taken the first-ever photos of a glow-in-the-dark shark producing its own light. The kitefin sharkŌĆtwitter.com/i/web/status/1ŌĆ”4Z
cnni

7:00 am ET March 6, 2021 RETWEET
At least 20 people were killed and more than 30 others wounded in a car bomb blast in Somalia's capital of MogadishŌĆtwitter.com/i/web/status/1ŌĆ”Ot
cnni

5:44 am ET March 6, 2021 RETWEET
As Europe looks towards opening its borders, the continent could be on the verge of another massive migrant row. AnŌĆtwitter.com/i/web/status/1ŌĆ”na
cnni