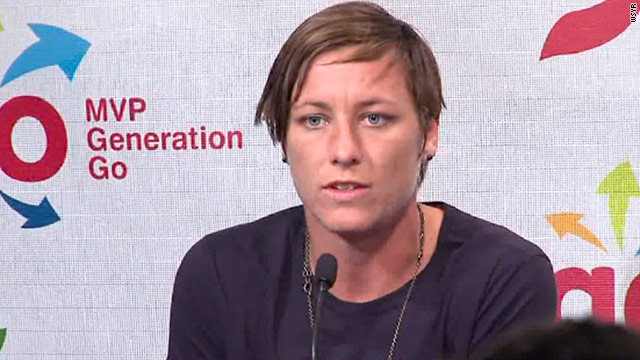 A record 15,404 people attended Wednesday night's Women's Professional Soccer league match between Wambach's pro team, the magicJack team from South Florida, and the Western New York Flash. The attendance was a record for any game in the history of the six-team women's pro league.

The Flash won, 3-1, but Rochester native Wambach was clearly the hero of the night, getting a key to the city from Mayor Tom Richards and a proclamation of "Abby Wambach Day" in Rochester. Wambach, who scored four goals in the World Cup in Germany, did not play in Wednesday's match because of an injured Achilles tendon.

"I'm proud that I was here tonight," Wambach told the crowd, according to CNN affiliate WHEC-TV.Â "Rochester came out for a WPS attendance record, andÂ I think that goes to show how much Rochester supportsÂ soccer. It's a great night, a night to remember."

Earlier, in an appearance before 2,500 people at a local shopping mall, Wambach said she was grateful for the support she and her teammates have received despite falling to Japan on penalty kicks in the World Cup final on Sunday.

"I've learned that this country isn't just about winning, and that's something I didn't know before," she said.

She kept the same theme during the game's halftime ceremonies.

"I know we didn't come home with the Cup, but I think we inspired an entire nation, and I know the message the women's national team always try to send is winning," ESPNW quoted Wambach as saying. "But I think we did something more here. I've never been so proud to be an American my entire life."

The WPS honored other Women's World Cup participants at the game, including Wambach's U.S. teammates Megan Rapinoe, Jill Loyden, Becky Sauerbrunn and Alex Morgan as well as international players in the WPS.

4:40 am ET April 17, 2021 RETWEET
A fifth of the worldâ€™s 7,000 languages will be dormant or dead by the end of the century. Entire cultures are dyingtwitter.com/i/web/status/1â€¦IasU
cnni

4:01 am ET April 17, 2021 RETWEET
Doctors say many young people are suffering coronavirus complications they didn't expect. And it's time to ditch thâ€twitter.com/i/web/status/1â€¦Nf
cnni

2:01 am ET April 17, 2021 RETWEET
The US Defense Department has confirmed that leaked photos and video of "unidentified aerial phenomena" taken in 20â€twitter.com/i/web/status/1â€¦Bz
cnni