RT @CNN: Florida lawmakers will hold a special session next week to finalize the governor's efforts to strip Disney of its special governin‚Ä¶

Secretary of State Antony Blinken is postponing his planned trip to China in response to a suspected Chinese spy ba‚Ätwitter.com/i/web/status/1‚Ä¶5S

A 24-year-old man has been arrested in connection with the suspected theft of a pair of emperor tamarin monkeys at‚Ätwitter.com/i/web/status/1‚Ä¶RU

The US labor market blows past expectations to add an astonishing 517,000 jobs in January, even as the Fed continue‚Ätwitter.com/i/web/status/1‚Ä¶9E

[Updated July 25, 4:25 p.m.] For her 9th¬Ýbirthday last month, Rachel Beckwith told people that instead of giving her presents, they should donate to a charity providing clean water to families in developing nations.

The Seattle-area girl came up with $220, short of her $300 goal.¬Ý She figured she‚Äôd try to raise more money next year.

Then came the crash.

Rachel died Saturday, taken off life support at a Seattle hospital three days after she and six other people were injured in a 14-vehicle pileup on Interstate 90 near her home in Bellevue, Washington, CNN affiliate KOMO reported.

But before her death, as word of Wednesday‚Äôs crash spread, so did news about Rachel‚Äôs fundraising wish. Her church took to Facebook, Twitter and its own website to promote her cause.

As of Monday afternoon, Rachel‚Äôs online fundraising page for the nonprofit group "charity: water"¬Ýhad landed more than $130,000 in donations, from more than 2,400 donors.

"Rest in peace knowing that your wish is helping people in ways that you could have never imagined," one contributor wrote on the campaign site.

Ryan Meeks, one of Rachel's pastors, said that "life is coming out of this death, with Rachel's generosity."

"It's inspired many, and it‚Äôs been amazing over the last 24 hours," Meeks told CNN's Don Lemon on "CNN Newsroom" Saturday night.

END_OF_DOCUMENT_TOKEN_TO_BE_REPLACED 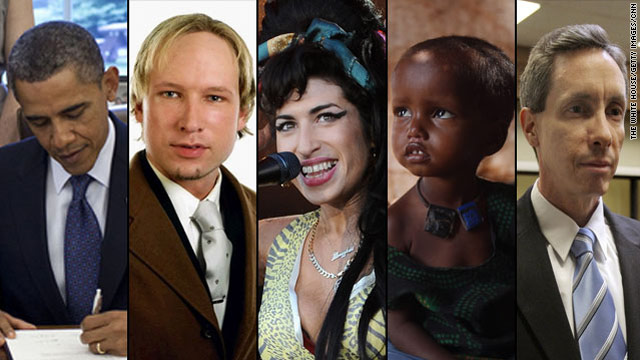 More than a week remains before the day the U.S. Treasury Department says lawmakers must raise the nation's debt ceiling, but legislators have said they'd need to start voting this week, and no deal has yet emerged.¬ÝHere is a look at this and other stories that CNN plans to follow this week:

Debt talks go to the wire

As of Sunday afternoon, Republicans were pushing a two-step process in which the debt ceiling would be raised enough to last the country through 2011, and then raise it again to last through 2012 after a commission found ways to reduce¬Ýthe debt through spending cuts and tax reforms, congressional sources said. The first step also would include spending cuts of about $1 trillion, the sources said.

END_OF_DOCUMENT_TOKEN_TO_BE_REPLACED 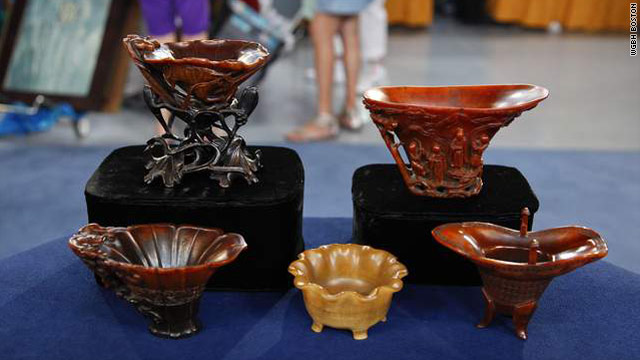 Chinese cups presented in Oklahoma at an "Antiques Roadshow" taping are worth more than $1 million.
July 24th, 2011
01:39 PM ET

On Sunday, appraisers from the PBS hit show "Antiques Roadshow" recorded the highest-value collection ever appraised in the show's¬Ý15-year history.

The big ticket item: five Chinese carved rhinoceros-horn cups dating to the late 17th or early 18th century,¬Ýwhich are worth between $1 and $1.5 million. An Oklahoma resident bought the cups inexpensively in the 1970s, according to a press release from the show's producers. The reason the value of the cups is so high is due to China's growing demand for Chinese antiquities.

The episode will air as part of "Antiques Roadshow's" 16th season in 2012. The name of the lucky owner of the cups was not released.

An 8 year-old boy was hanged by militants in Afghanistan's Helmand province after the boy's father - a police officer in the southern city of Gereshk - refused to comply with militants' demands to provide them with a police vehicle, officials said.

Afghan President Hamid Karzai condemned the hanging, saying "this action is not permitted in any culture or any religions," according to a statement Sunday, which provided details of the incident.

Karzai said he has ordered local authorities to root out the militants and arrest them "as soon as possible." The boy was kidnapped Friday. It was unclear when he was killed.

The incident comes amid a recent wave of attacks on local officials who are considered anti-Taliban. Read the full story

No formal negotiations were scheduled for Sunday, but Boehner told "Fox News Sunday" he intended to propose a way forward in the afternoon. Boehner also planned a conference call with the House Republican caucus at 4:30 p.m., according to congressional aides.

Both Boehner, R-Ohio, and Treasury Secretary Tim Geithner said a comprehensive deficit deal that would bring Republican support for raising the federal debt ceiling was still an option. 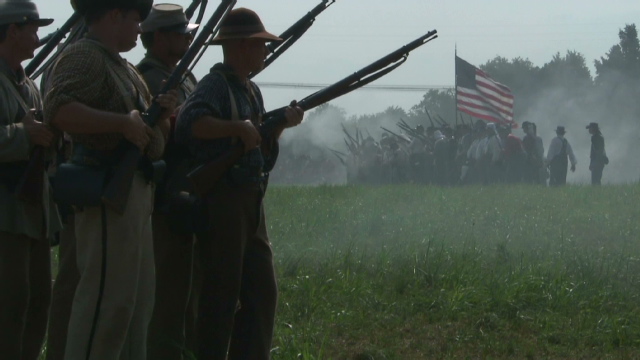 When the state of the economy is discussed, it is sometimes analyzed solely from a macro level. But when it's broken down to the micro level, it can be seen how much the economic downturn has affected individual states, cities and small towns.

Manassas, Virginia, is one such town. But city officials say mindful budgeting and wise spending have allowed them to stay one step ahead.

"I would say that Manassas is in that lean and mean area," said Harry "Hal" Parrish, mayor of Manassas. "We made some (budget) decisions about three years ago when we saw the downturn starting."

Nevertheless, revenue is always welcome, and Manassas officials are taking advantage of a major Civil War anniversary of which they can take full ownership. They are commemorating the 150-year anniversary of the Battle of Bull Run - the first major battle of the Civil War. The four-day event, which ends Sunday, offers everything from workshops and exhibits to parades and a re-enactment of the battle.

"Any time you have an influx of people, heritage and tourism - those kinds of people are going to spend money," said Parrish.

Manassas officials say those 25,000 tourists could result in a $25 million boost to their city's economy.

"I hope to bring in at least half of what I normally do for Christmas," said Christine Finnie, owner of Whimsical Galerie. "I have a lot of 150-year commemorative items. I have everything from T-shirts to the beautiful tapestry wall hangings exclusive to my shop, and I am hoping that will be a draw to bring people in for those items, but then also look around and see other things they might like."

The big draw this week is the battle re-enactment. Thousands of people are expected to attend despite record-setting heat. 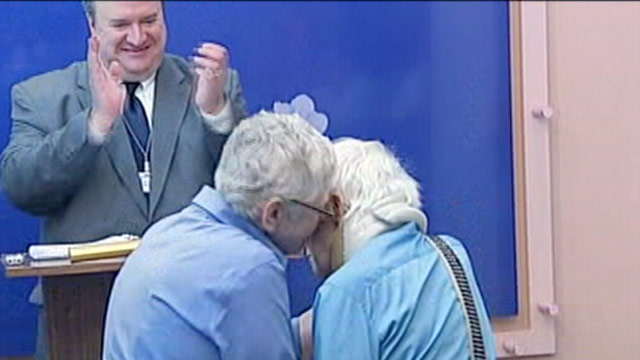 The first same-sex couple to get married in New York kisses before the official who performed the ceremony.
July 24th, 2011
09:13 AM ET

Phyllis Siegal, 77, and Connie Kopelov, 85, were married in a chapel at the city clerk's office as a crowd of onlookers cheered.

Hundreds of same-sex couples heard the news Friday that they made the cut in the marriage lottery that New York state instituted for Sunday when the state's Marriage Equality Act took effect.

The New York City clerk's office has been flooded with more than 2,600 requests for marriage licenses since the wording on the online application was changed from "Groom and Bride" to "Spouse A and Spouse B." The office could handle less than a third of those requests - gay or straight - on Sunday, according to a press statement the city released earlier in the week. The lottery was set up to allocate 764 slots for couples who want to obtain marriage licenses and/or be married at city clerk's offices on Sunday. If all 764 weddings actually take place on Sunday, it will set a one-day record for the city.

Marcos Chaljub and Freddy Zambrano were married after Siegal and Kopelov. The two tearfully said their vows as friends hovered and snapped pictures. "You're married!" one declared as celebratory hugs were exchanged afterward. Chaljub and Zambrano conducted last-minute preparations Saturday for their wedding, picking up bouquets of wildflowers for their bridesmaids and champagne for a family brunch afterward. The couple has been together for five years.

"I have certain people in my life, they're not totally OK with it, but they accept it, and just the fact they respect us because of that, it's really the most that I can ask for," Chaljub told CNN's Susan Candiotti.

The two have been wearing rings for five years, and said they don't plan to exchange new ones. "We're just going to polish them up and exchange them again," Chaljub said.

New York legalized same-sex marriage in June. The Marriage Equality Act was a priority for Gov. Andrew Cuomo after winning election in November. The law was passed under a Republican-led Senate after days of delays and negotiations between the two parties. New York City Council Speaker Christine Quinn, herself openly gay, told CNN New York is the place where the LGBT (lesbian, gay, bisexual, transgender) movement was born, and a place the world looks to.

"All eyes are upon it, and I believe it is going to help propel this movement forward faster than any of the other states have," Quinn said.

2:25 pm ET February 3, 2023 RETWEET
A handwritten letter sent by a young Marlon Brando to break up with his French girlfriend in the late 1940s could f‚Ätwitter.com/i/web/status/1‚Ä¶jR
cnni

1:42 pm ET February 3, 2023 RETWEET
The footage of Tyre Nichols‚Äô deadly police arrest is hard to watch, but for those who have survived brutal police etwitter.com/i/web/status/1‚Ä¶ZVS7
cnni

2:25 pm ET February 3, 2023 RETWEET
A handwritten letter sent by a young Marlon Brando to break up with his French girlfriend in the late 1940s could f‚Ätwitter.com/i/web/status/1‚Ä¶jR
cnni

1:42 pm ET February 3, 2023 RETWEET
The footage of Tyre Nichols‚Äô deadly police arrest is hard to watch, but for those who have survived brutal police etwitter.com/i/web/status/1‚Ä¶ZVS7
cnni

Secretary of State Antony Blinken is postponing his planned trip to China in response to a suspected Chinese spy ba‚Ätwitter.com/i/web/status/1‚Ä¶5S
cnnbrk

10:34 am ET February 3, 2023 RETWEET
A 24-year-old man has been arrested in connection with the suspected theft of a pair of emperor tamarin monkeys at‚Ätwitter.com/i/web/status/1‚Ä¶RU
cnnbrk

9:43 am ET February 3, 2023 RETWEET
The US labor market blows past expectations to add an astonishing 517,000 jobs in January, even as the Fed continue‚Ätwitter.com/i/web/status/1‚Ä¶9E
cnnbrk