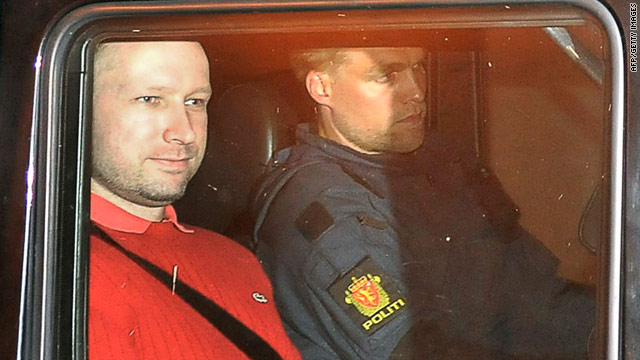 Overheard on CNN.com: Should Breivik be called a Christian fundamentalist?

"The guy said in his own manifesto that he wasn't a religious Christian, that his affiliation to Christianity was political. So why should we claim the guy?" -bamagrad03

"I find it interesting that when the terrorists are Muslims, people jump all over their faith, yet when they're Christian, they say that their religion had nothing to do with their act of terrorism. Double standard much?"–WillH85

Who is the suspect in the Norway attacks?

Anders Behring Breivik, a white Norwegian member of the conservative ProgressĀ Party, has been charged with the worst violence in Norway in decades. The suspect told investigators he belonged to The Knights Templar, which he described as an armed Christian order, fighting to rid the West of Islamic suppression. A manifesto bearing his name rants against Muslims and their growing presence in Europe.

Descriptions of him as a Christian fundamentalist had CNN.com readers arguing over whether those terms are accurate and relevant.

Yoduh99 said, "His manifesto is not specifically against Muslims but against multiculturalism and the 'Islamization' of Europe, which he believes the ruling Labor Party has allowed; therefore he went after them and their children. He's also agnostic, not a Christian extremist, though he believes in preserving the European Christian-based culture."

Treadmill replied, "I am afraid you are mistaken; read what he said on June 11: 'I prayed for the first time in a very long time today. I explained to God that unless he wanted the Marxist-Islamic alliance and the certain Islamic takeover of Europe to completely annihilate European Christendom within the next hundred years he must ensure that the warriors fighting for the preservation of European Christendom prevail.' ā

SSearthquake said, "Stop calling him 'right-wing Christian fundamentalist.' He crossed the line and he is nothing but a terrorist and whatever his views are, he cannot be defended." indigoth replied, "I disagree. He claims he was a Christian and there's no reason to think otherwise. Sure, he committed a very un-Christian act, but that doesn't change his religion. He is a 'right-wing Christian fundamentalist,' but he is also a terrorist."

faisalsh said, "Christian leaders often blame Muslim clerics of sympathising with the cause of the terrorists. I think that these events are very sad, however, it drives home the point that no terrorist belongs to any religion." IxNay said, "He is a Christian, but not one you would call a good Christian; remember that when you hear that someone is not following the tenets of Islam and you feel the need to berate the whole religion."

Suburbanite1 said, "Real Christians don't kill kids in the name of Christianity." BMILL said, "An awful lot of people who considered themselves to be Christians have killed a remarkably large number of people over the centuries. In America, you have to look no further than what happened to the Native Americans for evidence."

LonnieD5 said, "lol. Religion has nothing to do with this. It doesn't matter what religion you are, anybody could have something cause them to snap. The guy was a psycho; that's all there is to it. If he is a Christian, it's not even relevant."

kris5967 said, "I hope the Religious Right (and all religious and patriotic people, for that matter) can learn from this tragedy. This man acted from a jumping off point of religious zeal and patriotism and he let it take him over the edge. His religious devotion became intolerance and his patriotism became xenophobia and hatred. Let him be an example to us all of what not to become."

MartinOMĀ said, "This is the result of extreme views. Right-wing or left-wing, it makes no difference. Intolerance is not the answer."

'Can I touch it?' The fascination with natural, African-American hair

In a CNN.com story and video, women of color told of how returning their hair to its natural texture sometimes causes strangers to reach out and touch them. Some think the response is funny, but others are angered by what they think is latent racism. CNN.com readers, however, said it had nothing to do with race and everything to do with harmless curiosity.

ankelly said, "Give me a break. Why is it that black women are the only people who complain that others touch their hair? As a curly redhead, I have had my head touched a lot since I was a baby, and I don't feel wronged or write articles about exploitation. Pregnant women have their bellies touched all the time. If you are going to spend time writing an article on this, then knock off the racial victimization and keep the bigger picture in mind."

cpg352223 agreed: "I'm a white guy who had well-groomed shoulder-length hair in my early 20s. During a couple of summers spent on an inner-city youth project, African-American kids - children and teenagers alike - were continuously asking to touch my hair. Why does everything have to be about race relations? Blacks and whites have different textured hair and simple curiosity is just that."

maggitsmom said, "It's just curiosity. When I visited India, a few people asked about my blond hair, and some even touched it. Yes, it invaded my personal space, but I wasn't offended. They had simply never seen a white/blond person, in person, before. Can we please stop turning everything into racism?"

AshKetchumĀ said, "I am African-AmericanĀ and I have natural hair. I get how this is an invasion of personal space, but I don't agree with it being a racial thing. Black and white people want to touch my hair all the time. But some people have rude tendencies to just want to touch people without permission. My white friends especially tell me how soft my hair is, like their soft lamb toys they had when they were young."

puddytat said, "As a black woman I have the urge to touch the hair of complete strangers of different ethnicity. I'm merely curious. I'm from the Caribbean and we've got a beautiful mix of people - blacks, whites, Indians, Asians. I once sat on the bus behind a guy with locks, and I reached out and touched his hair without permission. I felt terrible doing it, but curiosity got the better of me. I should've asked first. But as humans we come in all different colours and shapes and textures and sometimes we just want to know what the other 'feels like.' The person being asked does not need to be so sensitive. It's just hair. ..."

8:00 pm ET February 6, 2023 RETWEET
When the record-breaking arctic blast came through the US on Friday, Mount Washingtonās Observatory was getting thetwitter.com/i/web/status/1ā¦uFHZ
cnni

7:00 pm ET February 6, 2023 RETWEET
Biden said the US ādid the right thingā when it shot down a suspected Chinese spy balloon on Saturday and maintaitwitter.com/i/web/status/1ā¦QxnG2T
cnni

6:01 pm ET February 6, 2023 RETWEET
People who have a healthy lifestyle before Covid-19 infection may have a lower risk of long Covid than their peers,ātwitter.com/i/web/status/1ā¦JE
cnni

8:00 pm ET February 6, 2023 RETWEET
When the record-breaking arctic blast came through the US on Friday, Mount Washingtonās Observatory was getting thetwitter.com/i/web/status/1ā¦uFHZ
cnni

7:00 pm ET February 6, 2023 RETWEET
Biden said the US ādid the right thingā when it shot down a suspected Chinese spy balloon on Saturday and maintaitwitter.com/i/web/status/1ā¦QxnG2T
cnni

6:01 pm ET February 6, 2023 RETWEET
People who have a healthy lifestyle before Covid-19 infection may have a lower risk of long Covid than their peers,ātwitter.com/i/web/status/1ā¦JE
cnni