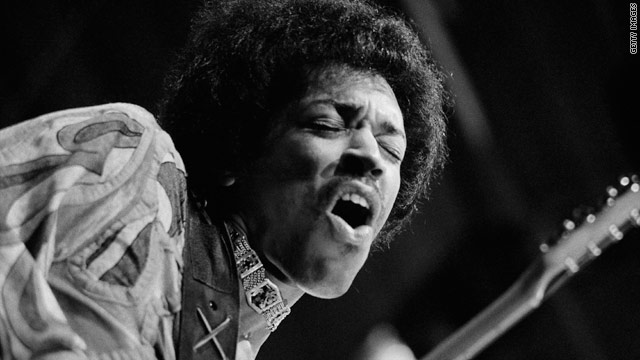 From Amy Winehouse to Jimi Hendrix, there are many great musicians who had one tragic thing in common: Dying at age 27.
July 25th, 2011
06:53 AM ET

The 27 Club: The age that marked death for so many great musicians

As most people know by now, incredibly talented singer Amy Winehouse was found dead in her London apartment over the weekend. She joins an unfortunate club of singers who led troubled lives, some who struggled with drugs, and died at age 27.

The so-called "27s" is part of the title of a book published a few years ago that examines the deaths of many of these young musicians and the tragic number they have in common.

Considered the greatest electric guitarist of all time and an icon of his generation, Jimi Hendrix died in London in 1970 at age 27. He was well known for boozing and drugs, though according to the London Telegraph, the autopsy on him found that he died due to choking on his own vomit but there was little alcohol in his system.

Janis Joplin died of a heroin overdose at the same age in the same year.Â  Jim Morrison, at age 27, died in 1971. He would be considered a pioneer not just for his music but poetry.

An earlier guitar great, a man regarded as the one of the best blues performers of all time, Robert Johnson died in 1938 at 27. It's unclear how he died but reports have circled that a lover poisoned him.

The Rolling Stones founder and guitarist Brian Jones died at 27 of what a coroner reportedly termed "misadventure" in 1969. He was a musician with many talents, playing the harmonica, sitar and marimba. Jones left the band shortly before his death. He was replaced by Mick Taylor.

Kurt Cobain died at 27 of a self-inflicted gunshot wound to the head in Seattle, Washington, in 1994. The frontman for the hit making, grunge-generation defining Nirvana is the stuff of legend.

In 1995, Freaky Tah of the emerging rap group The Lost Boyz passed away at 27. He was shot in the head as he left a party in New York.

US Soccer reaches a historic deal that will provide equal pay for both its men's and women's national teams playingâ€twitter.com/i/web/status/1â€¦jK
cnni

8:15 am ET May 18, 2022 RETWEET
In recent years, Australia has been battered by record-breaking rains, floods and wildfires, causing loss of livesâ€twitter.com/i/web/status/1â€¦ku
cnni

8:00 am ET May 18, 2022 RETWEET
A come-from-behind 2-1 win against Southampton on Tuesday night means Jurgen Klopp's men have a chance of winning tâ€twitter.com/i/web/status/1â€¦ut
cnni

7:48 am ET May 18, 2022 RETWEET
Pollution caused one in six deaths worldwide in 2019, a new study has revealed â€“ more than the annual global tollstwitter.com/i/web/status/1â€¦9aRi
CNNweather

US Soccer reaches a historic deal that will provide equal pay for both its men's and women's national teams playingâ€twitter.com/i/web/status/1â€¦W2
cnnbrk

10:46 pm ET May 17, 2022 RETWEET
The US Food and Drug Administration has granted emergency use authorization for a booster dose of Pfizer/BioNTech'sâ€twitter.com/i/web/status/1â€¦Uj
cnnbrk

11:00 am ET May 17, 2022 RETWEET
Iran-backed Hezbollah has lost its parliamentary coalition majority in Lebanon's first election since the country'sâ€twitter.com/i/web/status/1â€¦fG
cnnbrk