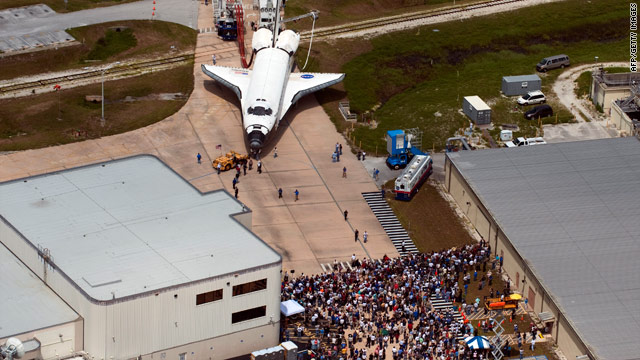 NASA workers look on as space shuttle Atlantis is towed back to its hangar on July 21 at Florida's Kennedy Space Center.
July 26th, 2011
11:38 AM ET

NASA is holding a career fair in Cape Canaveral, Florida, on Tuesday to help its former contract employees to find new jobs now that the shuttle program is ending.

Among those who will be rubbing elbows with government and private recruiters are some of the engineers NASA hired to maintain the shuttle's 20 different systems - "every part of the shuttle that required a team of engineers and technicians to get it ready for the next flight," said Lisa Malone, a NASA spokeswoman."

Over the years, NASA has been downsizing those teams, with Cape Canaveral seeing the most layoffs, including 1,500 on Friday, Malone said.

"I would say the lion's share of (the layoffs) has been in Florida," she said.

According to a fact sheet from NASA, the agency plans to lay off 2.223 Florida "shuttle prime contractors" in fiscal 2011, for a total of 4,371 layoffs in Florida since 2008. At the end of the year, NASA expects to have laid off 9,425 shuttle contractors nationwide since 2008.

Workers have known about impending layoffs, in some respect, since President George W. Bush announced the end of the shuttle program, Malone said. She said NASA and the recruiters hope about 1,000 former employees will come to the career fair and apply for new jobs.