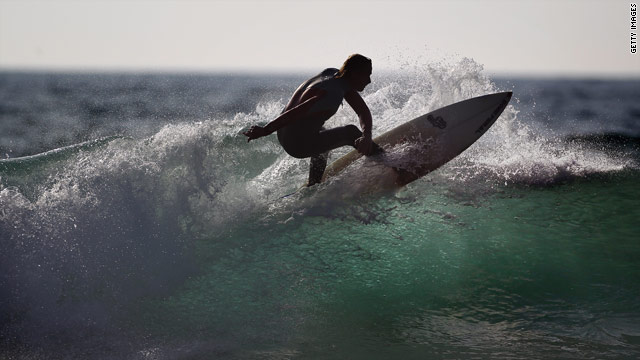 Even experienced surfers can run into trouble in unfamiliar waters.
July 26th, 2011
07:27 AM ET

Several blogs are buzzing Tuesday after a Long Island math teacher and well known local surfer went missing Sunday off the coast of West Lampung, Sumatra. Waves are notoriously treacherous off that  area of the Indonesian island. They are typically 12 feet or higher. CNN's iReport received a video of friends of the surfer holding candlelit vigil.

Daniel Bobis, who taught at Long Beach High School, founded the school's winning surf team and the first competitive group in the state. A colleague at the school told the Long Beach Patch, a local news website, that the "rescue efforts are horrible there" because the area where he was surfing is so remote.

"It was just a day like any other here," Brian Lonergan, another surfer who was with Bobis, told the New York Post. "Danny had just taken a wave before me. I couldn't see him, and a few minutes later, his board washed up on the shore."

Lonergan, Bobis' wife, Rachel, and the owner of a surf camp where the three were staying scoured the beach for the next 11 hours, the Post reports. A rescue team began searching after that.

He and the missing surfer's family are trying to work with local officials in Sumatra and get the United States Consulate to help by sending a rescue helicopter, according to the Post.