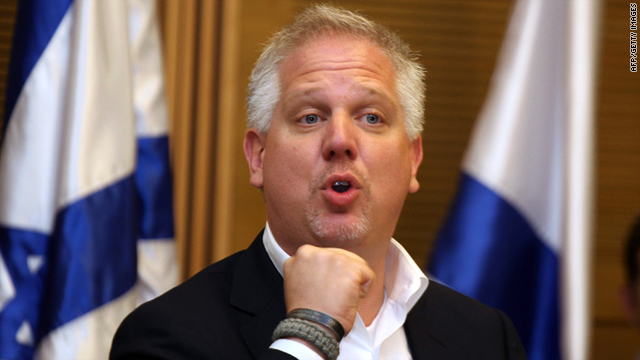 Glenn Beck is taking heat for comparing the Norwegian summer camp, run by the Labour Party and where most of the 76 victims in the terror attacks died, to the Hitler Youth organization.
July 26th, 2011
04:16 PM ET

Conservative commentator Glenn Beck is back in the spotlight. On Monday, he compared the summer camp in Norway where most of the 76 victims died to the Hitler Youth organization of Nazi Germany. Although he condemned the recent attacks, he also questioned what the victims were doing at a summer camp run by Norway's ruling Labour Party.

There was little debate about this story; nearly all CNN.com readers shared their disgust for Beck’s comments.

Acroyear said, “Just when I thought this man could sink no lower, he finds a deeper part of his sick, closed, black little soul to crawl into and spit his venom at the world. Shame on you Mr. Beck ... period.”

Doomguy said, “If anyone would try to cash in on this in the most hypocritical way possible, it would be our buddy Glenn Beck.”

Roedy said, “Beck is like a four year old boy who uses swear words because of the rise they get without the tiniest clue what they mean.”

lillemonster said, “Wow, some people just HAVE to ride on a tragedy for some PR. Norwegian young people are socially engaged and politically well educated. Seeing those survivors being interviewed – kids with clear ethnic backgrounds of African, Middle Eastern, Nordic, Indian, yeah, that just screamed 'Hitler-youth' to me.”

everyminute responded, "That anyone would tune into this man's show is the truly scary part.”

MacKinnon said, “You would think he would do a LITTLE research before he opens his mouth with such garbage. There are political youth camps in every country and they usually promote being actively involved in politics. Comparing it to Hitler Youth, especially in a country that actually suffered under Nazism is unforgivable.”

thenordicone said, “What makes this even more appalling is that Norway, when invaded by the Nazis (who had the Nazi youth), was used as a very larger 'breeder camp' for their Lebensborn experiments to create the Master Race. This remains an extremely painful memory to Norwegians. To compare their slain youth – mind you, recently massacred – to 'Hitler Youth' is beyond unconscionable to the point of outright evil.”

Oyvindur said, “Glenn Beck, I invite you to Norway! You have a lot to learn about democracy outside your little fascist box. Grow up. In Norway, he has no voice. Our focus is still on the victims of this horrible crime. I'm afraid this fascist will hurt USA more then he will hurt Norway. I think it’s important to make it clear that this man does not represent the majority of USA.”

Spinoff55 responded, “Every family has one, you know? One crazy, lunatic who will say anything just to get a reaction. On his behalf, I sincerely and truly apologize.”

Bubba01 said, “Really, you don't want him there. He's a plague. You'll have to scrub him off certain people with a wire brush.”

In a newly released survey, tens of thousands of men answered questions about children, money, sex, marriage and many other issues, illuminating what’s important to many men. For example, 68% of men say they believe in marriage and plan to say "I do." But CNN.com readers were mainly concerned about one subject: sex.

bobcamp said, "’About 1% said sex once a month would be OK.’ Well, then 99% of men are going to be disappointed with marriage.” youcantican responded, “AMEN!” ucidfool said, “Ain't that the truth...” BenDover69 said, “Truer words were never spoken.” And Jamalrehtorb said, “I try to tell all my single friends the truth before getting married ... they never believe you.”

But JRauz said, “You guys are depressing me. If you only get funky with your wife once a month, you need to reassess your priorities. You must be spending more time with your golf clubs or the TV than you do with your wife ...”

Champ1312 said, “Bottom line, if you're not getting any at home it's your own fault. Work on it. Some of you probably just need to do the dishes. I've heard that turns women on more than anything.”

tactSTL said, “I used to have sex upwards of four times a day with my GF when our relationship started. At the time I was 24, and my GF was 20. It was something I REALLY took for granted. Now five years deep into the relationship, and engaged, the norm is about three times a week. We both work 40+ hours a week, where as before I worked part-time attending graduate school, as did she. I am OK with this, but it took some getting used to. Sometimes I pout which is annoying I am sure, and sometimes I relentlessly hump her jokingly which can go either way."

amused2000 responded, “Married now for 13 years and two kids in, I'd *kill* for 3x/week. Hell, I'd bust kneecaps for 3x/month.” .vt500ascott said, “Count your blessings. Many married men would LOVE to still be doing it three times per week (with their wives). It's only going to get worse....” But Lenoriarose said, “Feel sorry for a lot of you guys. We still have sex 3x a week AND been together for nearly 12 years.”

No fakes on Google Plus

Google’s new social-networking site, Google Plus, is already eliminating users — the ones using fake names. So are they being too aggressive in booting users or merely establishing wise policy?

Randomquips said, “How dare they want me to use my real name!?”

worldiscrazy said, “I may go back to using the phone to give friends a call instead of using social media....”

echoplex said, “Anyone who doesn't see the controversy behind requiring your real name clearly hasn't read Google+'s privacy statement. It's vague on purpose to let you put your own meaning behind meaningless words like 'open platform' and 'integrated social experience."

xdougx said, “That’s messed up. You should be able to use a fake name on any site you wish, Google+, Facebook, etc. That’s a basic right of anonymity.”

FakeNameGuy said, “Um, it’s in BETA. Doesn't that automatically imply that things are going to change and by participating in the BETA, you should expect that?” thelower responded, “Don't confuse stone-set policy with beta features that are still under development.”

bernaki said, “They can’t spy well on people who are anonymous. solo1861 responded, “I don't know about that. Facebook seems to do it alright. They don't need your real name to flood you with targeted ads.”