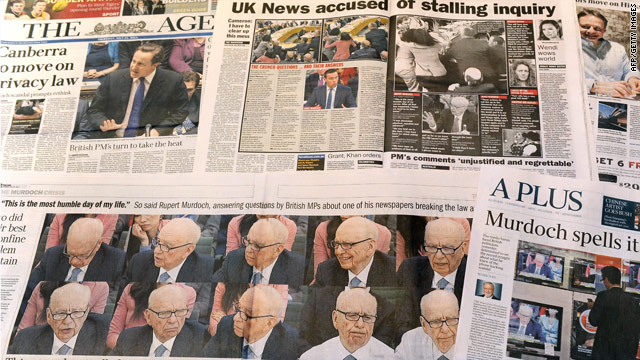 A look at how the Murdoch Parliament testimony appeared in papers in Australia, where Murdoch also has a stake in the media.
July 27th, 2011
06:56 PM ET

A calm in the Murdoch storm: What's brewing on the horizon?

In the week since News International executives answered questions from Britain's Parliament on the UK phone hacking scandal, the frenzy has died down a bit, perhaps allowing Rupert Murdoch and his minions to direct the news rather than react to it.

Gone are the daily live blogs and Parliament has been in recess. In the past few days, stories about┬Āthe troubles of Murdoch's News of the World have not been splashed across front pages as dominantly.

The much-needed time could be exactly what News Corp. needs ahead of some big meetings. And it gives us a chance to see where things stand and where they might be headed.

James Murdoch's place atop the mountain in jeopardy?

Going into the Parliament hearings, most of the focus was squarely on Rupert Murdoch, chairman and CEO of News Corp., but his son James emerged as a true key player in how this story would play out. In the days leading up to and during his testimony, Reuters and other media organizations reported that James Murdoch's position atop News Corp.-controlled satellite company BSkyB would be based on how his testimony went.

Immediately after he testified, things were murky about where he stood. But in the days following, accusations turned the murk into mud.

"Especially troublesome for James Murdoch was last week's public accusation by two former News of the World executives that he misled Parliament about when he learned that illegal reporting practices at the tabloid were more widespread," an article in the Murdoch-owned Wall Street Journal said.

The disputed testimony in front of Parliament set off a chain reaction of anger from some former workers about how truthful the younger Murdoch had been. "Pressure on James Murdoch Is About to Intensify" a New York Times headline proclaimed.

It's a day before the BSkyB board is set to meet - and depending on what newspaper or site you read - James Murdoch's fate is either completely doomed or safe as ever.

The New York Times talked to several analysts who paint a grim picture for the younger Murdoch.

ŌĆ£The biggest issue is whether James Murdoch is to remain chairman,ŌĆØ said Steve Liechti, an analyst at Investec Securities in London. ŌĆ£Given the issues going on with News Corp. and James MurdochŌĆÖs position within that business, it may be seen that it is not appropriate.ŌĆØ

In the same article, the Times talks with a former financial services minister in the UK, who said he thinks there's a need for a shake-up at the board level. Paul Myners told the Times he thinks that James Murdoch should be out of the chairman spot, but remain on the board in a certain capacity.

"Most corporate problems can be traced back to poor corporate governance and this company falls short in that respect,ŌĆØ he said.

But over at the Guardian, the opinion seems to be that James Murdoch can now rest comfortably at the head of the board table after gaining some important backing.

"James Murdoch is likely to remain chairman of satellite company BSkyB after winning the support of the leading independent director ahead of a crunch meeting later this week," the paper writes. "Nicholas Ferguson, Sky's deputy chairman, is understood to have given Murdoch his backing after a 'long conversation' in a private meeting, despite continuing questions about the role played by Rupert Murdoch's youngest son in the phone-hacking scandal."

Whichever way the pendulum swings, the decision about James Murdoch and any others regarding the scandal out of the board hearing could have bigger implications. The Wall Street Journal writes:

"BSkyB┬Ādirectors, representing the company's shareholders, could be seen as a proxy for News Corp. shareholders, since the companies have many top shareholders in common. That means that any move or signal from BSkyB's board on Mr. Murdoch's status in light of recent events could be an indication of his standing at News Corp., too."

Adding to the fray: An inquiry started by UK media regulator Ofcom, which is looking at whether News Corp. remains "fit and proper" to oversee BSkyB.

What does the public think about that? The UK's Independent reports┬Āa survey it conducted showed 65% of those polled agree the scandal means the Murdochs┬Āare not "fit and proper" to own any part of BSkyB, with 26% disagreeing with the statement.

The still-unraveling story: How pervasive was hacking and what will the impact be?

According to a New York Times article by David Carr, the scandal itself has splintered the "family business."

"While the family reign seems certain to fracture, the News CorporationŌĆÖs own fortunes are less predictable. A report by the analyst Michael Nathanson of Nomura Capital Investments nicely captured the moment. The market does not care if you have done bad things; it cares when you get caught."

The British judge leading the government-backed probe into illegal eavesdropping by journalists said he will start ordering people to testify and hand over documents "as soon as possible."

Brian Levenson, the judge, said the inquiry would try to deliver its initial report within a year, as instructed, despite the wide range of subjects it's supposed to cover.

Prime Minister David Cameron announced the inquiry July 13 in response to public fury at the accusation that people working for Rupert Murdoch's News of the World tabloid illegally hacked into the phone of a missing British schoolgirl who was later found dead. Anger from politicians, advertisers and the public almost immediately prompted the closure of the paper, a national institution and one of the best-selling papers in the English-speaking world.

Further accusations that the practice of phone-hacking was widespread, that police bungled an investigation into the practice, and that journalists bribed police have reverberated across the top levels of British power structures.┬Ā The scandal spread across the Atlantic with the accusation that papers in Murdoch's News Corp empire may have sought private details about victims of the September 11, 2001 attacks. The Justice Department has opened a probe into those claims.

Add to that the after the elder Murdoch, Rupert, faced Parliament, he's become a target of some former workers at News International.┬Ā The Wall Street Journal recounts some of the latest bad news:

"Last Thursday, the paper's most recent editor, Colin Myler, and its longtime top lawyer, Tom Crone, said they told James Murdoch in early 2008 of a crucial e-mail suggesting phone hacking went beyond a single journalist, contradicting the company line, put forward by Mr. Murdoch as recently as last week's hearing, that it didn't become aware that hacking was more widespread until much later. A third man ŌĆö Jon Chapman, former director of legal affairs at News International ŌĆö has also indicated he wants to correct 'serious inaccuracies' he claims were aired at the hearing."

And The New York Times posted an article that questioned Rupert Murdoch's argument to Parliament that he's not as fully engaged in his media empire as many people think, noting that with so many employees, there was no way he could know what was going on at every level of every company. The article dubs him a "fully engaged boss," based on the accounts of other Murdoch veteran employees. One former editor told the paper Murdoch was never disengaged and "reads avidly" from ŌĆ£the best clippings service I have ever seen.'"

ŌĆ£I really didnŌĆÖt buy that, to be honest,ŌĆØ said Roy Greenslade, a former Murdoch editor who is now a professor of journalism at City University London. ŌĆ£IŌĆÖm sure heŌĆÖs not as interfering as he was 20 years ago, but you can see through the way The Sun and The News of the World operate that his word remains law.ŌĆØ

Those series of comments have put a damper on the chances that the Murdochs/News Corp./News International et al. could end this quickly. With the new accusations of lies in the testimony itself, the winds are changing.

"It's a far cry from the sigh of relief some at News Corp. breathed after last week's parliamentary hearing, when the initial feeling was that nothing had transpired to make matters worse for either Murdoch," the article in the Murdoch-owned Wall Street Journal said.

Then, details of allegedly secret defense briefings regarding Afghanistan began to spill out. The Independent reported that Murdoch, his children, and other senior officials had "extraordinary access" to officials, including "more than two dozen private meetings between the family and senior members of the government in the 15 months since David Cameron entered Downing Street."

"In total, Cabinet ministers have had private meetings with Murdoch executives more than 60 times and, if social events such as receptions at party conferences are included, the figure is at least 107.

BBC reported that because of concerns about the number of meetings, especially during Murdoch's attempt at the BSkyB/News Corp. merger, "The minutes of those meetings will be published in the coming weeks" and that "minutes of a meeting with media groups opposed to the News Corp. bid will also be published."

- Trinity Mirror, the publisher of several papers including the Daily Mirror, has launched its own internal investigation regarding phone-hacking practices. The publisher saw a nearly 10% drop in stock immediately after the story broke, the Wall Street Journal reports.

- The entire debacle has the making of a Hollywood story. For now, it will begin on the bookshelves. According to the Hollywood Reporter, the journalist who first broke the Murdoch phone-hacking scandal for the UK's Guardian┬Ānewspaper, Nick Davies, has scored the first book deal.

But hang on, because the last chapter in this story seems like it is surely yet to be written.

27-year-old Nathan Paulin walked a 600-meter slackline from the Eiffel Tower to the other side of the Seine river iŌĆtwitter.com/i/web/status/1ŌĆ”jC
cnni

1:01 am ET September 26, 2021 RETWEET
Two amateur free divers have found one of the largest collections of Roman coins in Europe off the east coast of SpŌĆtwitter.com/i/web/status/1ŌĆ”EZ
cnni

12:31 am ET September 26, 2021 RETWEET
A black truck with the name of a funeral home on it brought a stark and unexpected message to downtown Charlotte laŌĆtwitter.com/i/web/status/1ŌĆ”47
cnni