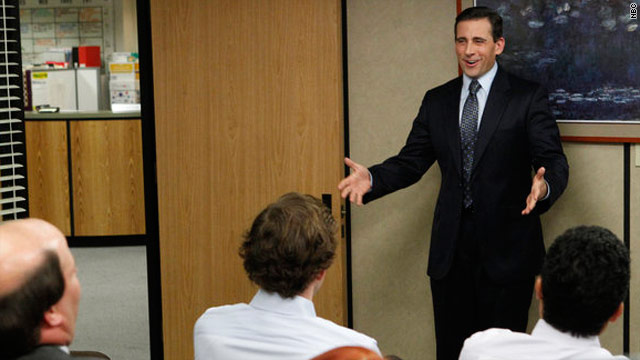 Afghanistan is about to have its own version of the bumbling boss Michael Scott (played by Steve Carell).
July 27th, 2011
11:32 AM ET

Afghanistan getting its own version of 'The Office?'

An inept security guard, a sour-faced secretary and a bumbling Minister of Garbage?

Paging Ricky Gervais, did you know your template for the original British hit show "The Office" is about to be redone again? It seems that way judging by a clip posted on blogs reportedly for a new show in Afghanistan called "The Ministry." The mockumentary tone of the show is just like the British and American version, which stars Steve Carell, but Afghanistan's "The Ministry" will tackle topics more serious than the shows in the West.

ToloTV, a company that began broadcasting in Afghanistan in 2004, will give its audience in the war-torn country "Office"-esque episodes focused on political corruption, the Washington Post reports.

A black truck with the name of a funeral home on it brought a stark and unexpected message to downtown Charlotte laâ€twitter.com/i/web/status/1â€¦47
cnni