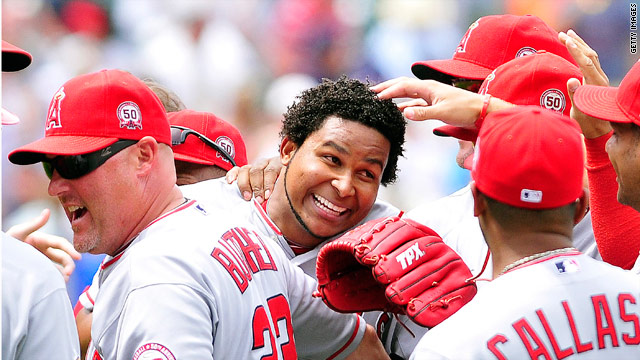 The Angels' Ervin Santana (center) celebrates with his team after getting a no-hit win against the Indians on Wednesday.
July 27th, 2011
02:45 PM ET

Los Angeles Angels pitcher Ervin Santana recorded an unusual type of no-hitter Wednesday afternoon, conceding an unearned run in the first inning before shutting down the Indians in a 3-1 win in Cleveland.

The complete-game no-hitter is the first for the 28-year-old Santana, whose 2011 record moves to 6-8.

The Indians got a base runner in the first inning on a fielding error by Erick Aybar, and runner Ezequiel Carrera eventually scored on a wild Santana pitch. But Santana settled down after that, allowing only one other base runner (on a walk), striking out 10 batters and allowing no hits as the Angels rallied for the win at Cleveland's Progressive Field. (See SI.com box score.)

Los Angeles trailed through four innings before tying the game in the fifth and taking the lead in the sixth.

Santana told Fox Sports West after the game that he didn't start thinking about a no-hitter until the eighth inning.

"Anybody can (do that) into five, six innings, but after eight, thatâ€™s when things get a little complicated and â€¦ more intense, and that's when I (felt) it,â€ť Santana told Fox Sports West, getting interrupted midsentence by a teammate who dumped a bucket of ice and water onto him.

Santana's outing Wednesday was the first solo no-hitter for the Angels since Mike Witt threw a perfect game in 1984, according to Â MLB.com.

Santana, who has an 82-63 record in seven seasons with the Angels, had a no-hitter through five innings in his previous start, at Baltimore last week, according to MLB.com. He ended up conceding three hits in more than seven innings in that game, which the Angels won 6-1.

5:22 pm ET January 29, 2023 RETWEET
Memphis PD deactivates the â€ścrime suppressionâ€ť unit some of whose members were charged with murder#Tyrenicholsholtwitter.com/i/web/status/1â€¦cWDS7q
sarasidnerCNN