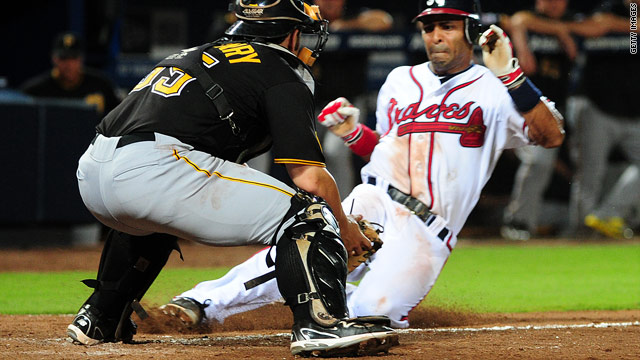 Was Braves win result of the worst call of the year?

[Updated at 5:42 p.m. ET] A lot of people who love baseball sing the praises of its timelessness. No clock, game goes until somebody wins. Joe Posnanski wrote a long piece about this in Sports Illustrated just last week. And only in baseball can a game go almost seven hours - 19 innings - end at almost 2 a.m., and actually be over too soon.

That‚Äôs because what was (in the minds of many) pretty clearly a blown call by¬Ýan umpire gave the Atlanta Braves a 4-3 win over the Pittsburgh Pirates early Wednesday morning. It was the longest game ever played at Atlanta‚Äôs Turner Field. If the ump had gotten the call right, the game could have moved into a 20th inning. See for yourself.

The umpire, Jerry Meals, told a pool reporter after the game that after he saw the replays, it did appear to him that Pirates catcher Mike McKenry tagged the Braves' Julio Lugo on the shin on a play at the plate when¬ÝLugo tried to score on a ground ball to third base. But, Meals¬Ýsaid, ‚Äúwhen I was out there, when it happened, I didn‚Äôt see a tag.‚Äù

Of course to Pirates manager Clint Hurdle, it was obvious all along.

"Many swipe tags are not applied to the runner with solid contact, but the tag was applied and the game should have remained tied," Torre said in an e-mailed statement. "I have spoken with Jerry, who is a hard-working, respected umpire, and no one feels worse than him."

"I have heard many discussions on umpiring and technology over the past two years, including both the pros and the cons of expanding replay. However, most in the game recognize that the human element always will be part of baseball and instant replay can never replace all judgment calls by umpires," Torre said. "Obviously, a play like this is going to spark a lot of conversation, and we will continue to consider all viewpoints in our ongoing discussions regarding officiating in baseball."

The impact of the Braves-Pirates call is magnified because both teams are fighting for division leads or chances for the National League wild-card slot, so every game and every call counts. For those less invested in the outcome of the game, you can check out this top trending hashtag: ¬Ý#jerrymealssaysitssafe, where people say they‚Äôll do something dangerous -¬Ýlike run with scissors, or put a fork in a light socket, or tell people that nothing bad will happen if the U.S. defaults -¬Ýall ending with ‚Äújerrymealssaysitssafe."

Besides being timeless, the baseball season is also sort of endless. It lasts for 162 games, so the Pirates, Braves, and Jerry Meals will all be back out there tonight for a 7 p.m. game.

Vaccine experts ‚Äî including those who serve on advisory committees for the US Food and Drug Administration and thetwitter.com/i/web/status/1‚Ä¶3hou
cnni

7:53 pm ET November 23, 2020 RETWEET
RT @KamalaHarris: The moment @JoeBiden and I walk into the White House, we will inherit a series of unprecedented challenges. Today's annou‚Ä¶
susancandiotti