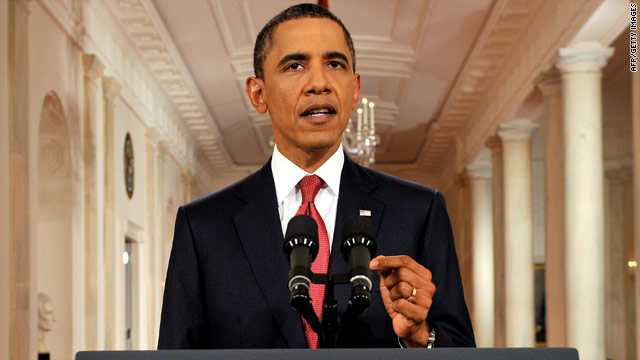 "I don't know if I'm relieved or concerned about some of the revelations in this article. While they all seem a bit shady, I suppose it's good to know that there are still some executive options on the table to keep us from going over the brink that Congress has brought us to."–svscnn

"We are having a debt-ceiling crisis because Congress has given the president contradictory commands," writes Constitutional Law professor Jack Balkin, "Congress has ordered the president to spend money, and it has forbidden him to borrow enough money to obey its orders." But President Obama may be able to save the United States from defaulting, he writes, perhaps by issuing $1 trillion coins or selling the Federal Reserve an option on $2 trillion in property.

katahdin62 said, "President Obama should do whatever he has to do to protect the country. Clearly most of the rational Republicans are gone, and the few who remain are too scared of the nuts to act in the best interests of the country. Since he's stuck dealing with screaming children who can't be reasoned with, the president should simply act on his own."

jschartz said, "Avoid the gimmicks of the first two options. Option three is viable since the Constitution may well grant the president that power based upon interpretation. If it comes down to the wire, I think President Obama should do this. Let Congress impeach him and question the constitutionality of this move. Maybe then America will wake up to the reality of our representation: Many House members place politics above America's well-being by refusing real compromise."

But mslman71 said, "No matter how frustrating dealing with Congress might be that is no reason to bypass it. What country is this? Hail the emperor, is that what you want? What happens when the pendulum swings back the other way and a Republican is in office?" MetsFan17 replied, "Where were you when Emperor W was running the country into the ground? Probably never saw a single thing wrong there."

jandrews10 said, "Defaulting on our debt would cause a collapse of the bond market, as I understand it. Interest rates would rise, causing a slowdown in the housing market because people wouldn't be able to afford to buy homes with higher rates. Credit card rates would rise. It would give the impression that our safest investment (bonds) are no longer a safe investment. It wouldn't be a good thing."

MsMaryE said, "I predict that on 3 August, President Obama will give a press conference on who and what will get paid. He will not use the 14th Amendment. He will let the tea party and Boehner hang themselves."

takingsides said, "Man, if the U.S. defaults I am going into business digging moats and building drawbridges."

Reaction to pastor giving thanks for 'smokin' hot wife'

A Baptist preacher who gave the invocation at a NASCAR race tickled some and offended others last weekend by thanking God for his wife and corporations for their cars, and then signing off, "Boogity, boogity, boogity, amen." Many CNN.com readers applauded the pastor, Joe Nelms, for his good humor and appreciation of his wife.

Karen said, "I think he's a sweetie-pie husband for saying that in the prayer! I think God loves it when we're crazy-in-love with our spouses!" shelly said, "I think it was wonderful! I've been married for 23 years and this was the first time my husband really heard a prayer!:))"

Ashlyn said, "I think it was sweet. This woman is married with kids, and if she had any supermodel days, they are long behind her. If her husband wants to proclaim her 'smokin' hot' for everyone (including God) to hear, good for her. We should all hope our spouses still find us hot after years of marriage and multiple kids. The product placement seemed a bit over the top, though."

Jesus Loves Nascar! said, " 'And yea, verily, thou shalt roar around a circle again and again in thy holy attempt to become rich and famous in a Jesus-loving way as thousands of beer-smeared yokels who haveth not much upstairs hoot and yowl and thinketh this is something amazing as they give lots of their cash to rich people and hope to see a gnarly crash, for Jesus loveth a few good smash-ups.' The Gospel of Rubes, 12:34-45"

But others were not amused. SAM said, "To pray in Jesus' name, the highest name, above all others and to make a mockery of it is a disgrace! God does not want us to act as if we are dipped in pickle juice and while you can ask anything in that name, this pastor went too far and should be ashamed."

peter lawrence replied, "Dear Sam, if Jesus was to hear that prayer he would be laughing as well. You, on the other hand, have no sense of humor and probably no life. Go get a life and have some fun and stop being an ass!" CN0 said, "Jesus loved a party." Don said, "God doesn't mind, he has a good sense of humor. How else would you explain the platypus?"

Airbrushed makeup ads of actor Julia Roberts and supermodel Christy Turlington are misleading, Britain's Advertising Standards Agency ruled. The watchdog agency banned L'Oreal's photos of the two, saying they exaggerated the ability of the products they were promoting to cover lines, wrinkles and blemishes. L'Oreal called the Roberts image "aspirational."

Kudos to the British, said many CNN.com readers. seter16 said, "Europe is so much further ahead of us in so many ways. In America we value that we can lie to our citizens to get them to buy a product." Neutral79 said, "Must be nice living in a country where the regulators actually do their jobs on behalf of the public." guru2u2 said, "They insist on truth in advertising? How odd and clearly un-American."

SomeDudeinNCsaid, "If you see how much work goes into Photoshopping an advertisement of even a beautiful woman, you would be shocked. They are so aggressive in removing every little blemish that people have a totally unrealistic view of who those people even are." pmichner said, "Just say at the very end of the commercial 'This has been an advertisement for Mega Airbrushing Company.' "

Claghorn said, "The thing I like best about makeup is the persistent use of the phrase 'natural.' Constantly telling you that coating yourself in several layers of chemical compounds is the way to achieve the 'natural' look." CG77 said, "If the makeup could achieve those effects, why didn't they?"

1MyOpinion said, "Look how good my product is (after I fix it)."

A father in Pakistan is suspected of killing his two daughters and their four children by setting their house ablazâ€twitter.com/i/web/status/1â€¦sy
cnni

10:36 pm ET October 18, 2021 RETWEET
A 13-year-old adopted pug has a huge following on TikTok for his hilarious forecasts of the future. CNN's Jeanne Moâ€twitter.com/i/web/status/1â€¦3d
cnni