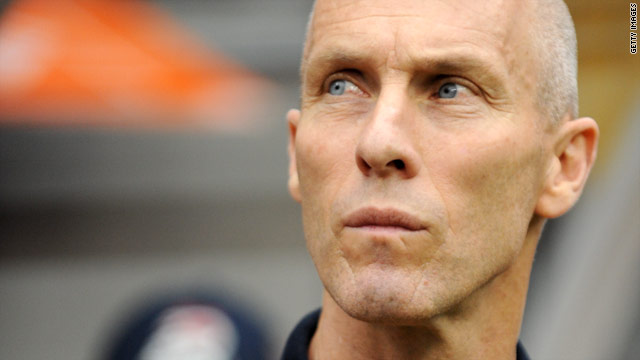 [Updated at 5:21 p.m. ET] U.S. Soccer said Thursday it has fired men's national team coach Bob Bradley, who was less than a year into a four-year contract extension he signed last August after leading the Americans to the World Cup's second round.

A U.S. Soccer spokesman, Neil Buethe, said the organization is "not getting into specifics at this point" as to why Bradley was let go. The move comes a month after the team lost the final of CONCACAF's regional championship - the Gold Cup - to Mexico in Pasadena, California.

"We want to thank Bob Bradley for his service and dedication to U.S. Soccer during the past five years," U.S. Soccer President Sunil Gulati said in a statement released Thursday. "During his time as the head coach of our men's national team he led the team to a number of accomplishments, but we felt now was the right time for us to make a change.

"It is always hard to make these decisions, especially when it involves someone we respect as much as Bob. We wish him the best in his future endeavors."

Gulati's announcement came after he met with Bradley and U.S. Soccer CEO Dan Flynn in Carson, California, according to the statement. U.S. Soccer said it would make another announcement Friday - 12 days before the squad's next friendly match, against Mexico, on August 10 in Philadelphia.

Buethe declined to say whether a replacement for Bradley has been lined up. He also declined to reveal the subject of Friday's announcement.

Bradley compiled a 43-25-12 record as the team's head coach after taking the position in January 2007.

After Bradley guided the team to a 2007 Gold Cup title, the squad defeated top-ranked Spain in the semifinals of the 2009 Confederations Cup, sending the team to its first-ever final in a major FIFA tournament. The United States took a 2-0 lead in that title match against Brazil in South Africa, but wound up losing 3-2.

The United States qualified for the 2010 World Cup, finishing first in its CONCACAF qualifying group. At the World Cup in South Africa, the team went undefeated in the group stages for the first time in its history, tying twice and winning once. Ghana then eliminated the Americans in the second round, 2-1.

Bradley signed a four-year contract extension after the World Cup.

In his final tournament in charge, Bradley led the Americans to their third straight Gold Cup final, which they lost 4-2 to Mexico on June 25.

The team was winless in four home friendlies before this year's Gold Cup, tying Chile in January and Argentina in March before losing to Paraguay (1-0) in March and Spain (4-0) in June.

9:44 pm ET May 11, 2021 RETWEET
The Biden administration has announced that it is moving forward with the US' first large-scale offshore wind proje‚Ätwitter.com/i/web/status/1‚Ä¶wg
cnni

9:01 pm ET May 11, 2021 RETWEET
The Gemini North telescope in Hawaii and the Hubble Space Telescope have captured Jupiter in visible, infrared and‚Ätwitter.com/i/web/status/1‚Ä¶3Q
cnni