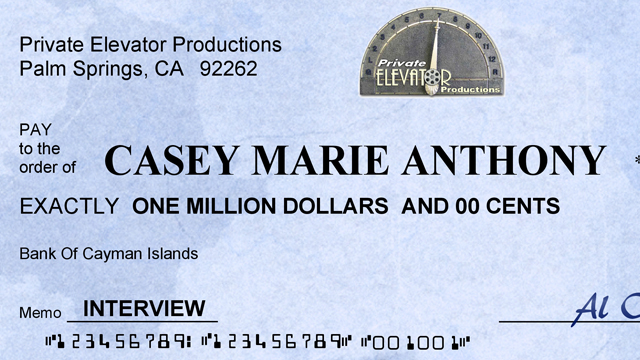 TV producer Al Taylor has offered $1M to Casey Anthony for the first interview with her after being discharged from jail.
July 29th, 2011
11:27 AM ET

Gotta Watch: Will Casey Anthony accept any of these high dollar offers?

Casey Anthony walked out of jail with only $537.68 in her pocket…not a lot of money to restart her life, especially when her parents are reportedly refusing to take her in. But, she’s gotten plenty of high dollar offers from magazines and television producers to keep her afloat for a good long while. And it sounds like Casey and her attorney might be considering them…

Birthday suit – Larry Flynt of Hustler says he’s been in talks with Casey’s attorney regarding his offer of $500,000 for her to pose nude in his magazine. On top of the half million dollar check, Flynt also promises her 10% of the issue’s profits. “People have been coming to me in droves wanting this,” Flynt said, “There are men who wanna see her in her birthday suit”.

Keeping it classy – Hugh Hefner won’t even go there. The Playboy founder was amazed at the number of people who contacted him after Casey was found not guilty, asking him if he would do a pictorial on her.

Do you think Casey Anthony should take one of these offers? Should these offers have been made in the first place?