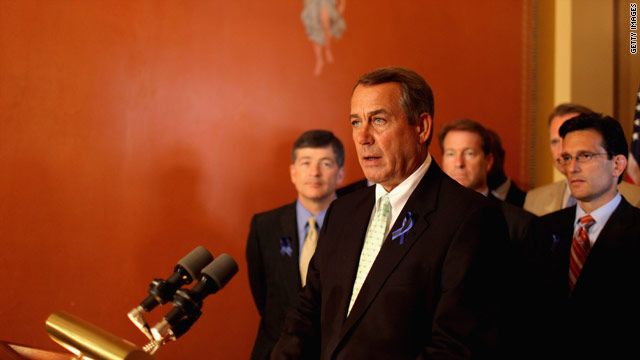 Debt ceiling crisis - House Speaker John Boehner's plan that would raise the nation's debt ceiling and enact sweeping cuts in government spending could come up for a vote Friday after House Republicans called off a vote late Thursday. The delay revealed a deep rift within the GOP that could undermine the party's latest attempt to avoid an unprecedented national default and stave off potential economic catastrophe.

Economic data - The government will report Friday how much the economy expanded in the second quarter - but don't expect much good news. A CNNMoney survey of economists forecasts the economy grew only 1.8% in the second quarter, which would be a slight slowdown from the first quarter when it grew a lethargic 1.9%. The University of Michigan's consumer confidence report for July also is due Friday.

Alleged Fort Hood plot - The Army and local and federal law enforcement officials continue to investigate what they say was a foiled terrorist plot against Fort Hood, Texas. Pfc. Naser Jason Abdo acted on his own and is not connected to any terrorist group, a law enforcement official told CNN. Abdo said he wanted to attack Fort Hood soldiers, authorities said, and police reportedly found bomb-making materials in his hotel room in Killeen, Texas.

Tropical storm eyes Texas - Tropical Storm Don has its sights set on south Texas as it moves across the Gulf of Mexico, the National Hurricane Center said. The storm, which would bring much-needed rainfall to the parched state, is forecast to make landfall along the Texas coast late Friday night or early Saturday.

Air France crash report - The French investigative authority BEA will release its final report on the Air France flight from Brazil to France that literally fell out of the sky two years ago, killing 228 people. The agency will present the exact circumstances of the June 2009 accident with an initial analysis and some new findings based on data recovered from flight recorders.

Approximately 200,000 shipping containers remain gridlocked off the coast of Los Angeles on Monday as pandemic-rela‚Ätwitter.com/i/web/status/1‚Ä¶18
cnni

12:13 am ET October 19, 2021 RETWEET
The NHL has handed a 21-game unpaid suspension to Evander Kane of the San Jose Sharks after an investigation into w‚Ätwitter.com/i/web/status/1‚Ä¶Ne
cnni

11:57 pm ET October 18, 2021 RETWEET
The family of Elijah McClain has reached a settlement agreement with the city of Aurora, Colorado, the city and att‚Ätwitter.com/i/web/status/1‚Ä¶v2
cnni